25 years ago, the Berlin Wall and Thierry Noir

The Berlin Wall came down 25 years ago. I remember it like yesterday, although at the time I did not understand the full meaning of what was unfolding in front of my eyes.

Looking back at it now as an adult, I can see the importance of what this event meant – the cold war was on its way out. Tyranny and freedom denials were starting to become something the West Berliners could dream of getting rid of. 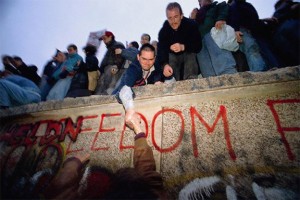 Berliners at the time of the fall of the Berlin Wall

Such dark times and oppression naturally led to various acts of rebellion, from President Kennedy standing by the Wall in 1963 and declaring: “Ich bin ein Berliner.”, to artists braving the Grepos (or border police) to express their disapproval of the tyranny that was in place in West Germany.

And it is the latter that I want to talk about here. I want to pay tribute to all these artists who defied the ‘death strip’ as it was called, a no man’s land between the two walls, the border of East and West Berlin, and Thierry Noir, a French artist, knows it all too well.

Thierry Noir is thought to be the first street artist to paint the Berlin Wall. Born in 1958 in Lyon, France, he moved to Berlin in January 1982 with two small suitcases, and lived in a squat at Mariannenplatz, near the Berlin Wall.

His first attraction to the city was the fact that David Bowie and Iggy Pop lived there at the time, and Thierry Noir was a big fan on their music.

“Nothing really happened at the Berlin Wall. There were no cars, no shops, no noises. I never saw any ‘actions’ with the Grepos, never saw any soldiers shooting at anybody.”  – Thierry Noir

One of the first things he painted on the Wall was this elephant (see photo below). “I started painting outside because I wanted to say that it’s good to put art in the streets and not solely in museums and galleries.” 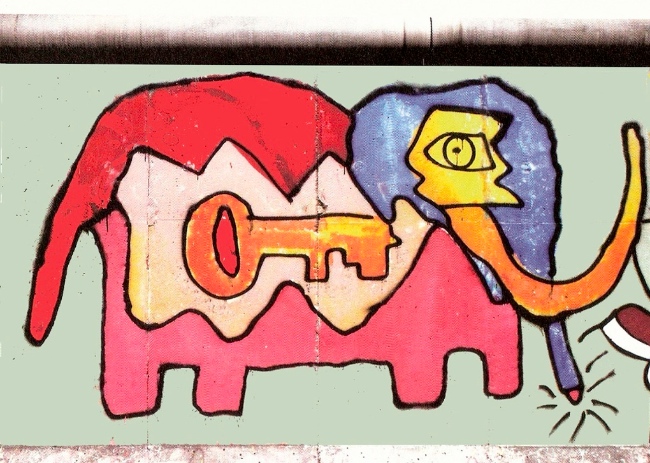 This painting symbolises the key to success – heavy work every day. In other words, get your ass out there and grasp opportunity, do not stay at home waiting for something to happen –  that is what the artist’s message was all about. 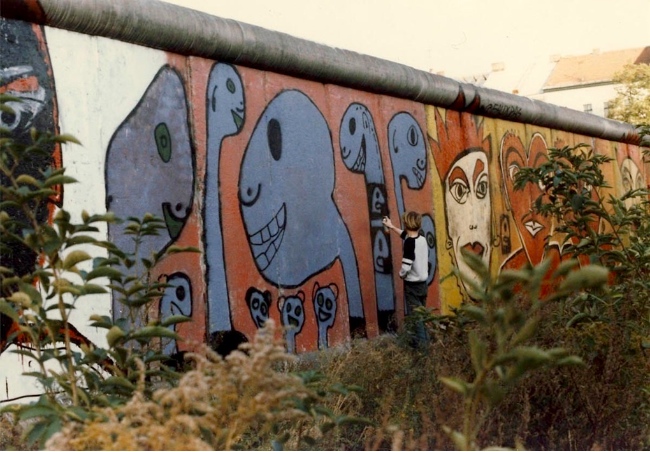 “We used to collect leftover paint and materials from the renovation of houses in Kreuzberg. We made do with whatever we could find. We had no money to buy materials.” Thierry Noir 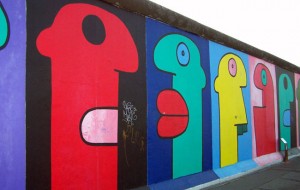 Thierry Noir’s style quickly changed to become what he is famous for – brightly coloured paintings depicting cartoon-like profiles (see below). The artist called this transformation – his Fast Form Manfesto, which is in fact the result of a need to adapt his style.  It was in an effort to cope with the hundreds of people who approached him to talk while he was painting, at risk for being caught by the German authorities.

One famous incident is when Keith Haring was invited to come and paint the Berlin Wall at Checkpoint Charlie in October 1986. Thierry Noir, with the help of Christophe Bouchet, an artist he’d met a few years earlier, painted a series of 2-meter Statues of Liberty at this precise location. Unfortunately the wall got painted over in yellow, in preparation for Keith Haring. Haring however was not aware of this, so after apologies and embarrassment from Keith and annoyance from Thierry Noir, both artists were fine in the end.

What else to say about Thierry Noir? A great artist with a great story, his brightly coloured paintings are now seen as iconic and are still visible on the wall’s East Side Gallery.