The Fiesta Resistance: mixed medias at its best 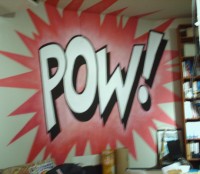 I may have never heard about this exhibition if Twitter did not exist so let me thank you Twitter first, some do not get you little Twitter tool, ART-PIE heart you little Twitter tool. A swift click on that link from that tweet I got and am now onto the Picture On Walls website or POW. ‘I Like the left menu navigation items’ I instantly thought. ‘I like the sketchy look of them’ my second thought was. A quick scroll down to the bottom of the website and... Read More

Posted by Pierrick Senelaer on November 22, 2009 · Leave a Comment

Ha ha ha… That was bound to happen, wasn’t it? Caught out because of twittering too much or the wrong thing! Jason Willians aka REVOK (US graffiti artist) got caught out in Australia (as he was leaving the country) after twittering where he would drop his next graffiti pieces as well as after posting actual pictures of his graffitis freshly sprayed on walls of Melbourne. And if you wonder how the police knew when to apprehend him at the airport, he twittered it saying... Read More