Posted by Pierrick Senelaer on February 28, 2011 · Leave a Comment 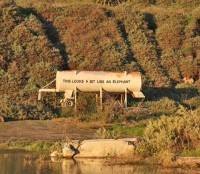 This is the follow up of the first set of new pieces from Banksy spotted in Los Angeles last week, read about it here Two more pieces can be now seen in L.A. One is located not far from the USC campus and depicts what looks like a family running with a kite, understand here the comparison with the illegal immigrant caution signs that can be seen along the Mexican border. Another quite quirky piece has been done on an abandoned oil tanker. A simple message says on it –... Read More

Posted by Pierrick Senelaer on February 18, 2011 · Leave a Comment 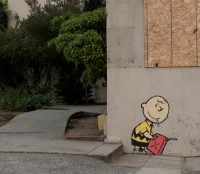 Everybody is talking about so it would be almost rude not to feature the three new pieces Banksy has just dropped in Los Angeles. The first piece depicts Charlie Brown holding a gas can, this piece was dropped on what looks like a house that burnt down. The second one is a child holding a gun and firing crayons. And the most recent and probably the bolder one can be spotted on Sunset Boulevard and features the vision of the artists on Mickey and Minnie Mouse. We will all have... Read More

Posted by Pierrick Senelaer on October 13, 2010 · Leave a Comment 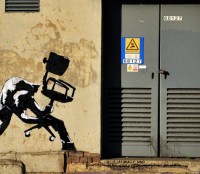 Banksy has finally dropped again in London and this time, he has put a strong emphasis on different signs of pop culture which suits so well street art and especially stencils. Some says that that one of his new work is a clear reference to The Clash London Calling album cover, another one refers to Futuramaâ€™s Bender and in the last one, Keith Harringâ’s Dog can be clearly recognized. Locations of these new works: The Clash London Calling album cover – Thomas... Read More 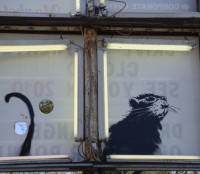 Bristol born artist Banksy has been at it big time in America and have left his mark in various towns and cities across America – Chicago, San Francisco, Detroit, Los Angeles and Toronto. Read More  Read More