Posted by Pierrick Senelaer on January 19, 2010 · Leave a Comment 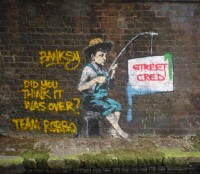 Team Robbo and his crew still seem bitter and have painted over another one of Banksy’s pieces in Camden. This guerilla started when Banksy painted over one of Robbo’s historical throwups – see earlier post here. Team Robbo went back to Regent Street Canal and modified the piece which now seems to imply that Banksy is fishing for ‘street cred’. One thing to notice in all this is the two different approaches – Banksy paints over while Team Robbo... Read More

Filed under GRAFFITI, IN THE NEWS, STREET ART · Tagged with

Posted by Pierrick Senelaer on January 1, 2010 · Leave a Comment 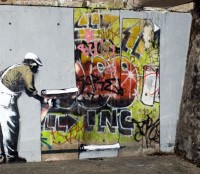 And here we go again. ‘I am the best, you are not’. ‘There is only one place a the top and it’s mine’. Boring. Banksy’s latest work has landed him in an old fashioned street fight. He indeed thought he’ll modernize a 24-year-old work by ‘King Robbo’ in Camden, North London. Read More  Read More 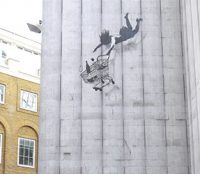 Posted by Pierrick Senelaer on February 26, 2016 · Leave a Comment 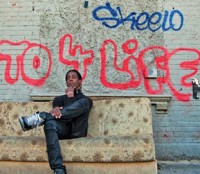 Click to enlarge About Exhibition Martha Cooper is a legendary photographer who has shot around the globe, beginning with USA to Asia. She worked both for papers and magazines like New York Post and National Geographic and independently, making contributions into her personal archive. Stories and captures that appeared in her lens were different and timely: travels, people and of course art. She has been documenting graffiti and street art for 40 years and her iconic book “Subway... Read More 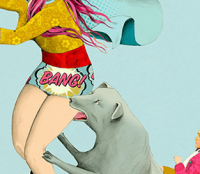