The Friends of Tony Romanoff at Pure Evil

Following his appearance in the adidas is all in campaign, London street artist Lucas Price a.k.a. Cyclops has been hard at work on his latest exhibition ‘The Friends of Tony Romanoff’. Words from Pure Evil gallery This film below documents the show and is narrated by the eponymous Tony Romanoff who uses an electronic voice generator to speak on the artist’s behalf. Featuring brand new conceptual photographic work, as well as two dramatic installations in the gallery’s... Read More

Filed under PREVIEW · Tagged with arch402 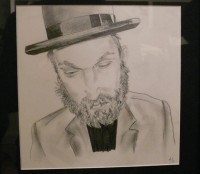 Amar Stewart steps up to the Lava gallery for his first solo show of 2011. We first viewed Amar’s work in the East Gallery in early 2010, the show had dark undertones, accented with sections of colour, A mixture of spray paint and acrylic. A different approach has been taken this time, the entire gallery almost devoid of colour, a series of large canvases featuring Black and white photorealistic portraits. This was a understated approach for show early in the year and to... Read More

Woozy at the outsiders

The Outsiders is proud to present I Dont Care About My Face, the first UK solo exhibition by the artist Woozy. Downstairs in The Dungeon, Woozy will exhibit a colourful showcase of his most recent canvases, works on metal and paper. Originating from Athens Greece, Woozy is renowned for his large-scale murals and outdoor wall paintings that have graced the international urban landscape. Collaborating with a wide network of street artists most notably Os Gemeos, he has travelled... Read More

Filed under CONTEMPORARY ART, PREVIEW · Tagged with The Outsiders, Woozy