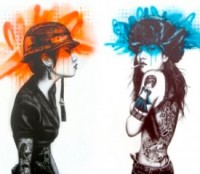 Cork native artist Fin DAC has not been around the street art scene as long as some other artists such as Inkie for example but he has been nevertheless left his mark out there and his works are appreciated by an ever growing amount of people across the world. UK, France and USA is where you are the most likely to encounter his ‘Urban Aesthetics’ as he likes to define his art and style which combines paint and stencil techniques. Fin DAC did not go to some Art Schools... Read More

Posted by Pierrick Senelaer on February 4, 2013 · Leave a Comment 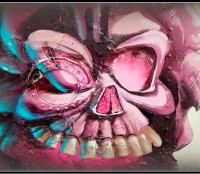 Mr Zero The Duke of Lancaster, a decommissioned and abandoned cruise liner shipwrecked docked off the North Wales Coastline in Wales has become the home to a range of urban artwork murals. Here are the latest pieces that came up : Mr Zero and Fatheat are part of Street Art Crew and Colored Effects Crew, a Hungarian Street Art Crew. They have made the trip to North Wales from their native Hungary, to leave their own message about corruption on the 1950s cruise liner, with their... Read More