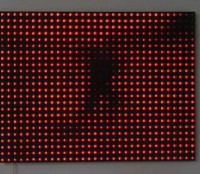 A man runs. He falls down. He struggles back onto his feet and he runs some more. It’s a simple narrative. Even without much detail, you can understand what’s going on. Pause the video, though, and the scene isn’t nearly as clear. Movement makes up for the lack of other visual information. Your brain can read and understand a video at much lower resolution than it would need to make equal sense of a still frame. Meet Jim Campbell, a former Silicon Valley engineer... Read More

Posted by Pierrick Senelaer on November 26, 2009 · Leave a Comment