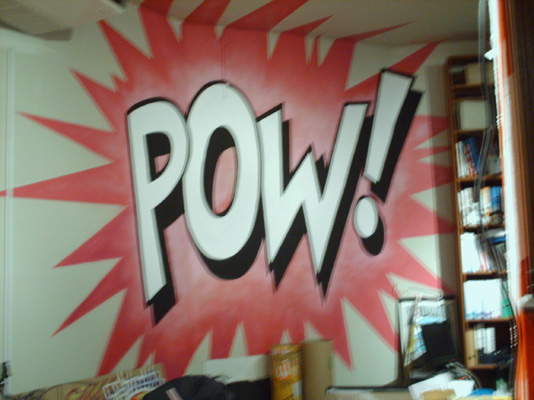 A swift click on that link from that tweet I got and am now onto the Picture On Walls website or POW. ‘I Like the left menu navigation items’ I instantly thought. ‘I like the sketchy look of them’ my second thought was. A quick scroll down to the bottom of the website and I got it right away: loads and loads of creativity, imagination, art wonders on here and ART-PIE was right, The Fiesta resistance exhibition did not disappoint.

Unique, fresh, rich, interesting, exciting, different, colorful, busy … the list could go on and on and be made of thousands of words here as what I was seeing was actually made of thousands of things on top of each other but all smiling at me as I was stepping into POW. As always, ART-PIE did not know where to start and unless more ‘classic’ galleries (like the Whitechapel Gallery which ART-PIE had just been to earlier that day) that room I had just stepped into did not help to lead you that way or the other so I went straight ahead, I went for what looked like a shed with tall stools in front. Yes, that place looks like a theater or a movie set!

Leaving behind the shed, I am now nose stuck onto my first wall looking at them – wood panels, trays, cardboard, pallets all painted with rather unfamiliar looking characters. It all became clear though after talking to a member of staff: The Fiesta Resistance actually feature Mexican artists and clearly you can get the feeling that the Aztecs civilization may have been of their source of inspiration.

The next piece along though might not come from that same inspiration and actually scared me a little but the sight of that bumpy car randomly parked next to the shed made me feel again at ease. It is rather impressive and right there on the wall looking at you: a flayed skins of Mexican gang members with everyone of their tattoos reproduced in authentic detail!

My journey continues in this amazing world of bits and bobs, artwork half on the wall and half on the ceiling or floor, with stuff that pleases your eyes.

ART-PIE is a big fan of trying as much as possible different medias/supports in art and The Fiesta Resistance is precisely what it is all about. If you are bored of the piece of art on impeccably stretched canvas, this is the place to go to, these are the kind of artists that will expand your vision of art.

Look out for the next exhibition at POW which is not yet penciled in but which should happen some time in February next year. ART-PIE was told that it could be about a Spanish artist that has not got all the recognition he is ought to have or so the guy with a checkered shirt from POW told me (ART-PIE apologized for not asking your name as he would have had a mention right here right now).

Other photos of the exhibition below

2 thoughts on “The Fiesta Resistance: mixed medias at its best”