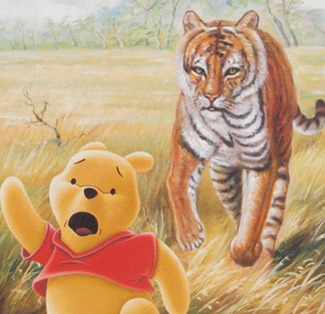 As a self-taught artist from Ohio, Brandenburg brings an expansive perspective to viewers. Born in 1954, he paints contemporary works that offer a light repose from the mundane.

His versatile style allows him to incorporate renderings into a variety of works on a variety of mediums. Less art than humor, he creates an entertaining interlude and encourages viewers to recreate everyday scenes in a less than ordinary manner.

Renamed The Bird, Brandenburg alters a metal sign from 1956 used to advertise the Ford Thunderbird. In the original a couple speeds away in the automobile, waving to onlookers. In the re-mastered version, the passenger extends her middl

e finger to the people standing by. From metal to cardboard, In Mammy Cakes Brandenburg alters a Hostess Cupcake box from a chocolate frosted vanilla cupcake to a white mouthed image mirroring minstrel shows that ran in America from the 1830’s into the mid-1900’s. During these often severely racist performances, white men painted themselves in black face.

To compliment his images, Brandenburg includes brief bios and explanations into the life of his creations. One of his works, Hannah Lecter, features a young girl on a greeting card. Originally, she was eating a tasty piece of chocolate but Brandenburg coated the original snack with a dripping red acrylic paint to make it appear as if she indulges in human flesh.  The title and corresponding story names her as Hannibal Lecter’s love child. He also alters several Norman Rockwell paintings depicting the ‘ideal’ family life of 1940’s America including one from Rockwell’s “Four Freedom” series entitled Freedom from Want.

Brandenburg redubs it Freedom from Stress and replaces the original turkey with a glass pipe, beers, and whiskey explaining, “experience suggests that the happy family is going to need a little more than turkey to keep things running smoothly for the rest of the day.”

Brandenburg brings a fresh look to “normal” images by incorporating himself into a variety of mediums at his new solo exhibition. By redesigning iconic images, he urges society to reexamine omnipresent sights that do not always reflect truth.