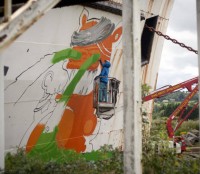 A LATVIAN artist, who’s work can be found in a number of European locations, has been revealed as the person responsible for the two giant pirate murals that have recently appeared on an iconic landmark, on the North Wales Coastline. The two pirate-like characters seemed to appear overnight, earlier this month, on the side of The Fun Ship, formally The Duke Of Lancaster, which has become a well-known landmark in Llanerch-y-Mor, near Mostyn. It has now been confirmed that... Read More