â€˜Made in Britainâ€™ – a Themed group exhibition featuring all new 24 x 24 inch artworks from a selection of talented artists living and working in the UK.

London Miles Gallery personally invites you to our upcoming themed group show â€˜Made in Britainâ€™ showcasing a refreshing selection of artists from throughout the UK which have come together to
celebrate all things wonderfully British. London Miles Gallery has hand selected a group of emerging artists to portray their representation of their home country with a 24â€ x 24â€ art piece that has been visually inspired by a British tradition, iconic figure or historical memory of theirs. 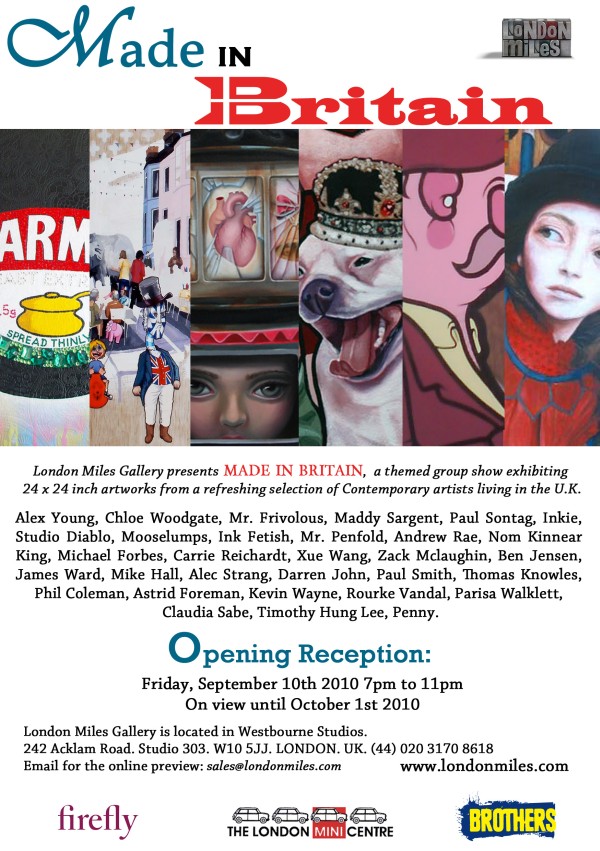 ‘Made in Britain’ opens to the public on Friday September 10th in Westbourne Studios, home to London Miles gallery. The opening reception will celebrate everything quintessentially British and on display will be a selection of vintage miniâ€™s supplied by the London Mini Company, tasty cider thanks to Brothers and Fireflyâ€™s union Jack health drink. The evening reception will include the showcase of more than 30 artworks, music and a room filled of the UK’s best emerging artists.

Exhibition on display until October 1st, 2010 at Westbourne Studios.