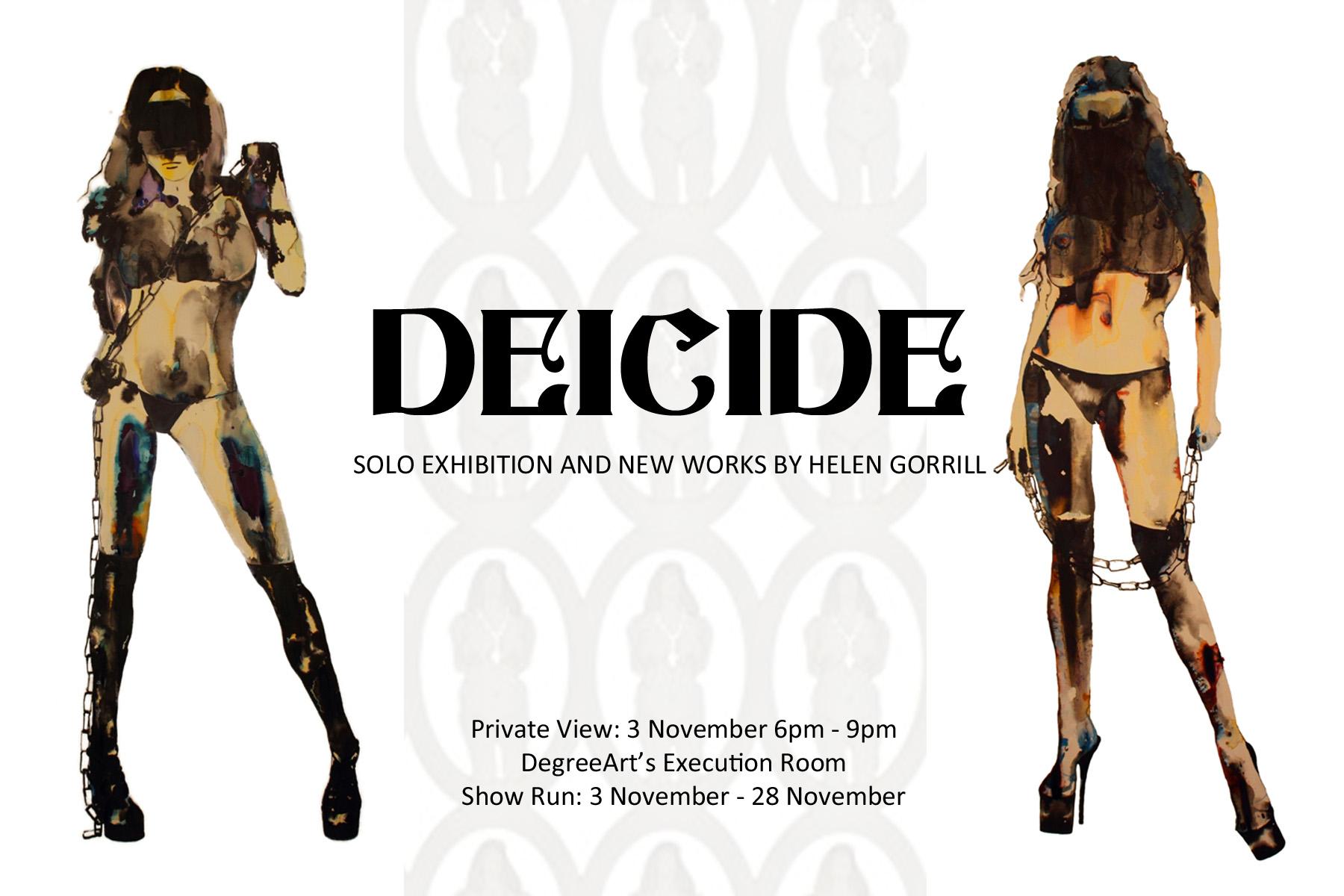 Saturday 26 November I made way to Degree Art’s gallery on Vyner Street to view the works of Helen Gorrill on show in the solo exhibition titled DEICIDE. The gallery is not so far away from Bethnal Green as people might think and a fair pace will get you to the gallery in 10 minutes.

Upon arrival to the gallery I chatted with gallery manager (and all round arts, culture & fashion voice) Ryan Lanji who gave me a few pointers about the show, which I had not picked up on from my brief musings online. The first of which being the portrait of a Pope which was attached to the floor at the entrance of the gallery; meaning that everyone that enters walks over the Pope – a sign of the conflict with sexuality and religion which appears a central aspect in Helen’s work.

After which Ryan explained about the Confession Chamber which was the interactive element of Helen’s work; a look at the notion of confession, who to and why. Within the chamber, which has been meticulously created to represent a real confession box, are confessions from every body that has entered, along with some well know confessors from the art world. Some of which have been stitched into the fabric of the inside, some written in chalk on the walls and some placed in envelopes on the wall. Everybody was encouraged to enter there own confessions…

The last point we covered, which really was not apparent with the online material was the sheer size of Helen’s work. I had imagined them to be water colour pieces which would look great in a plain white frame and would be of reasonable size to go above the fire place, hang in the dining room or be a centre piece for the spare room. I did not for one minute imagine them to be the slightly oversized real life height that they are!

The reason for this as I found out when talking with Helen is intertwined within the whole body of work. The role reversal; the woman in charge, the woman in power, the woman imposing in height standing above the crouched, submissive man.

Helen’s work was hung from chains on the ceiling to allow for the full effect of the size to be felt. They covered the main walls of the gallery and in my opinion are hard to find fault with in terms of the concept. Secured to the floor were 3 images of men in submissive postions, all positioned under the images of the women. In addition to this there was Helen’s provocative installation pieces which are steeped in religious references as well as a swipe at the controlling nature of the Church.

Helen’s background is that of an interesting mix of religion and control. A Christian background, a marriage to a Policeman who was also a Jehovah’s Witness and a seeming questioning of the effect of male influence in her life and choices. One of Helen’s shows was censored; the male nudity was covered but the female nudity was not – a very interesting point, especially as it was censored by men. This also questions the influence that men have had over society and the extent of control over what social acceptances should be. Helen’s work was actually featured on a Vatican sponsored website for some time because they thought it was promoting the Confession – when they realised it was actually asking a few more questions it was promptly removed!

Listening to Helen reference sexuality, feminism and religion in her work was very compelling in considering whether this is just a result of Helen’s personal experience or is a genuine perception of the world which many of us overlook or choose to ignore. Helen was supported by Degree Art’s very own Chloe Lawrence who covered some points in
literature relating to the feminist cause and the response this drew from female artists. References to Yoko Ono’s “Cut Piece”, Carole Schneemann’s “Interior Scroll” and Judy Chicago’s “Dinner Party” were all made. In addition we also heard from Kim Foxton who spoke about religion and the role of women through history and how this has changed.

Questions from the audience as well as Degree Art Founders Elinor Olisa & Isobel Beauchamp followed and this evolved to more personal discussions with the speakers accompanied with refreshments.

Overall a very well put together show which had important questions to state, as well as what I felt were aesthetically pleasing works. A great
environment to discuss the work and a well chosen line up of supporting speakers made a very enjoyable ‘art evening’.

Information
The provocative solo show ran from 3 November to 28 November 2011 with an evening in conversation with the artist on Saturday 26 November 2011.

All works are available for purchase from Degree Art.
To read more about the artist and to view all works visit: http://www.degreeart.com/events/deicide-solo-exhibition-and-new-works-helen-gorrill

© Degree Art and the Artist