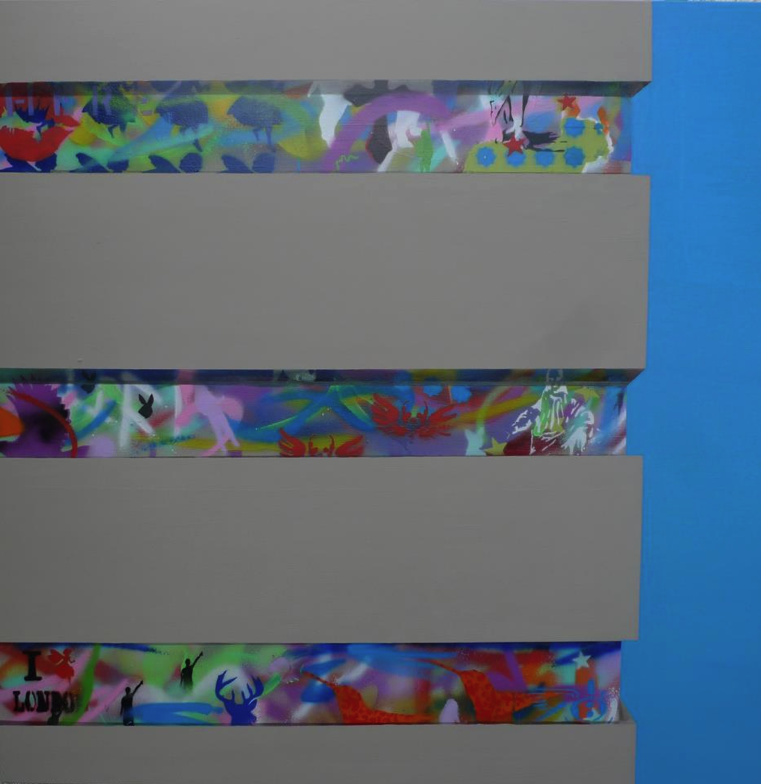 Ben Oakley and No Format Gallery present a new show of over 40 artists helping everyone get into the Christmas spirit! Opening preview night Friday 7 December from 5.30pm til late at No Format Gallery.

With an array of ‘urban’ work by artists such as Guy Denning, Ray Richardson, David Bray, Static, RYCA, Pam Glew, Carne Griffiths and more there should be an arty treat for everyones stocking.

Ben Oakley says: “come along its going to be a right old knees up with over 40 top notch artists, many in attendance” 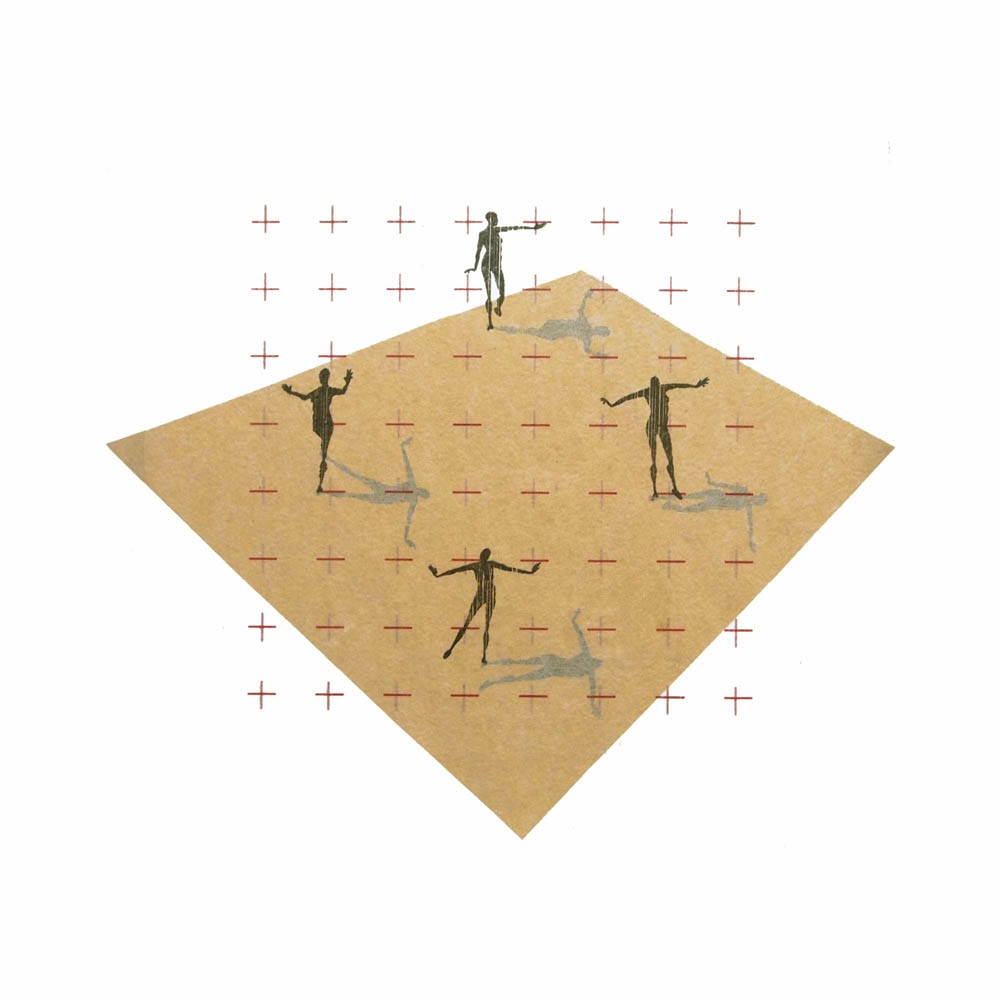 A fresh and exciting solo exhibition of new works by Veta Gorner. Veta is a multi-instrumentalist high quality Printmaker. Using her own Press she creates unique etchings, lithographs drypoint, screenprints, colographs and processes that have not even been named yet.

Technically excellent her works are strong in colour and delicate in content, they carry a dense raw energy that are aesthetically balanced, some built up from layers of the finest hand made papers with waxes and thread woven through, it is in the detail that you can read the time consuming journey that goes into each individual piece.

Veta shares time between her London & Swedish Studios always observing the cultural differences in each country and around the world, she is engaged and fascinated in the parallels of life as they overwhelm and delight us simultaneously.” 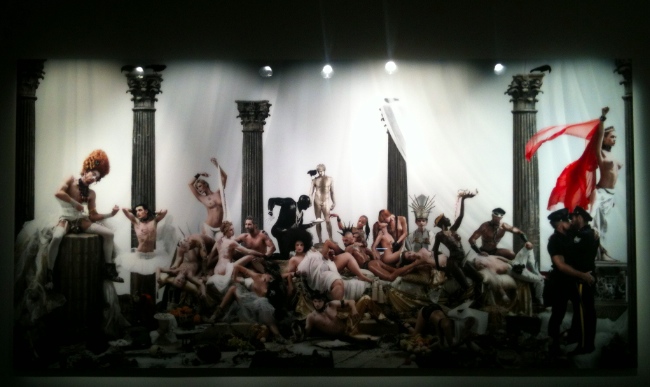 Thursday evening I managed to drop by the Londonewcastle space to see first hand the Rancinan show presented by The Future Tense. I  had known about the exhibition for some time and was really keen to visit. I was not disappointed.

Opening from The Future Tense

“Gérard Rancinan is one of the world’s leading contemporary fine art photographers. For the past 7 years, Rancinan, along with writer Caroline Gaudriault, have been developing the ‘Trilogy of the Moderns’ – a revolution in three acts. Pitched somewhere between comedy and tragedy, this vivid photographic tableau and accompanying texts paint a picture of a confused humanity, blindly groping in the darkness, obsessed with fame and guided only by an absolute desire for generalised happiness.”

Walking through the show I envisioned myself watching the film Donnie Darko and playing out scenes from which include the infamous bunny head. In addition the irony was that I was humming “Mad World” the corresponding score to the film. Batmanesq and cartoon imagery which although perhaps has been included within other contemporary art, I do not feel this is in any way reproduced. It feels new, yet old, fresh yet re-worn and very much engaging. 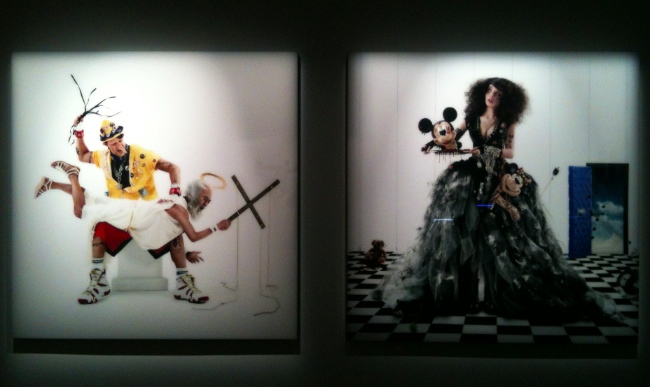 The narrative which accompanies the show, actually does not waffle or meander through meaningless meanings, it provides a commentary, which I find sits well with me. This is the first time for many months where the ideals which are being conveyed actually mean something to me. References to a society documenting its own history via social mediums are made and the act of me writing these very words endorse this. In addition the term ‘non places’ and ‘non people’ have been used which when used in conjunction with the virtual Twitter & Facebook world actually have a relevant description of contemporary society. 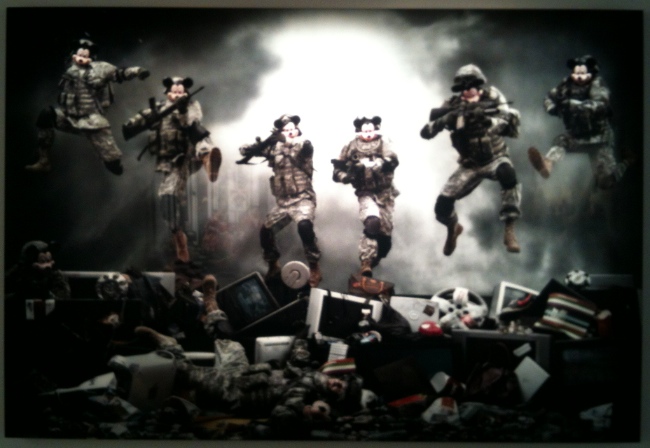 The works themselves are comparable to hyper realistic painting, coupled with well staged and well shot content arranged in such a way that just works. The sheer size of the works give an air of importance to them whilst drawing you in to the content. Another perfect fit to the show is that the final piece of work for the series was actually shot in real time at the exhibition using real people attending the show. This for me bridged the gap between aesthetic and interactive art in a way which I hope everyone can appreciate.

Ed Bartlett of The Future Tense said to me that “to fully appreciate the show you must come back” and he is right.The show runs until 24 June 2012. For more information visit: http://londonewcastle.com/arts-programme/events/2012-06-07/wonderful-world 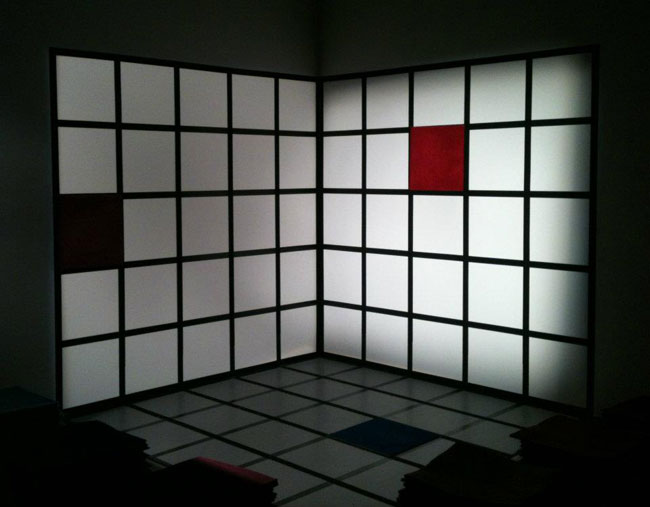 Julia Vogl won the 2012 Catlin Art Prize for her ‘social sculpture’titled ‘Let’s Hang Out’. The work invites visitors to create a communal area by selecting and affixing coloured carpet titles that colour-correspond with Julia’s suggestions of various pastimes (such as ‘call Mum’, ‘tweet’, etc.). The work will evolve throughout the duration of the Catlin Art Prize exhibition while encouraging visitors to interact – and hang out.”

The official comments on the Art Catlin website confirming the recipient of the £5,000 award, now it its 6th year.

The exhibition showcasing the finalists of the artists compiled in the Catlin Guide was hosted at the Londonnewcastle project space and in my opinion was laid out and staged to create an explorative feeling when entering.

Before hearing the winner I was one of the first people to interact with Julia’s “lets hang out” and felt that for me this was quite rightly a centre piece, seemingly the concensus as it turned out.

In addition to film and other mixed media work the next most enjoyable piece was marbles and sand staged in one of the corners of the show. A mystical and engaging feeling from starting at the work and felt very much similar to my own thoughts on moments in time.

The second piece which was a stuffed horse on its back clamping on to a made object. This was very striking but wasted on me.

The guide is fast becoming as much a tool for collectors as it is for the artworld in showcasing talent and clamouring for the prize. 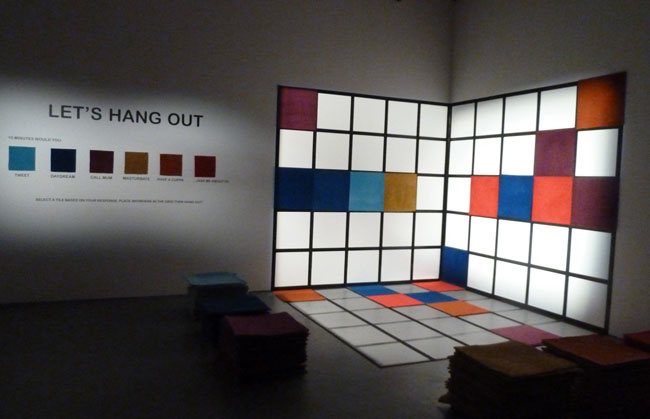 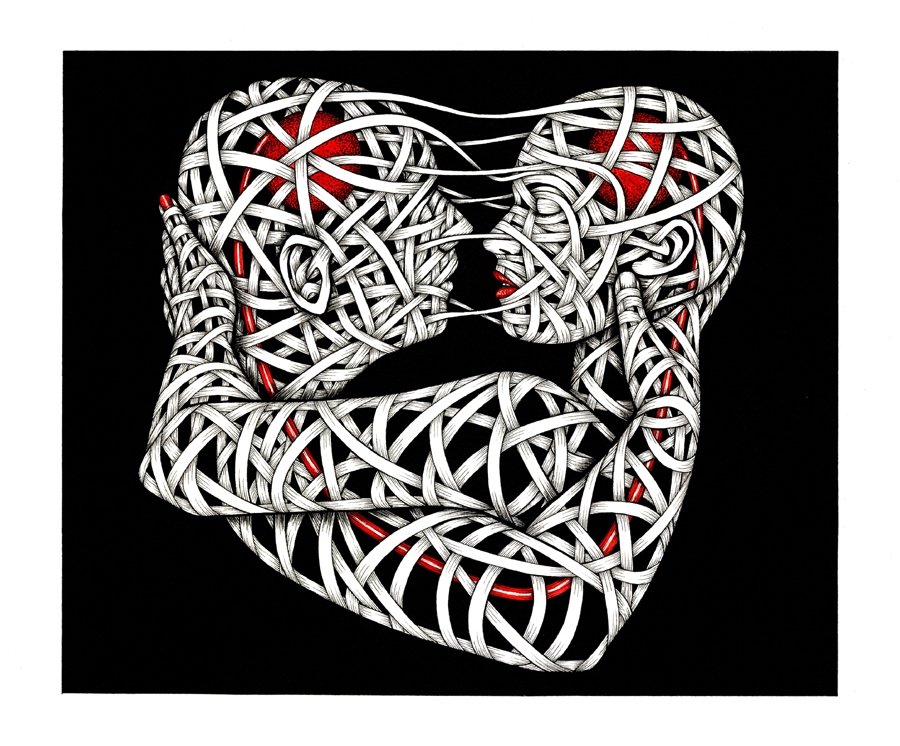 Having been a fan of Ben Oakley’s art work for the last few years I was really excited to see the Ben Oakley Gallery open in Greenwich last year. Having spoken to Ben this week he has given me details of the upcoming show in January which looks to be another good mix of contemporary street art. Ben works with a range of artists involved in the emerging and established contemporary and street art culture as well as creating his own work and being involved in various art projects and curatorial events. As a lover of series my favourite work of Ben’s are his trademark fairies, bears and yeti’s.

Show Details:
In January 2012, Otto Schade brings his extraordinary artwork to the Ben Oakley Gallery in Greenwich. He will be exhibiting original unseen artwork and ltd edition prints from 21st January – 5th February.

Originally from Concepcion in Nothern Chile, Schade now lives in London, where he works as a University Lecturer in the field of Architecture. He balances his career with a passion for creating beautiful and detailed artworks, both in the studio and at street level.

Schade has forged a reputation as one of London’s foremost street artists, with his instantly recognisable ribbon motif adorning many walls throughout London and beyond gaining admiration from Private collectors and Artists alike.

Otto Schade will be in attendance.