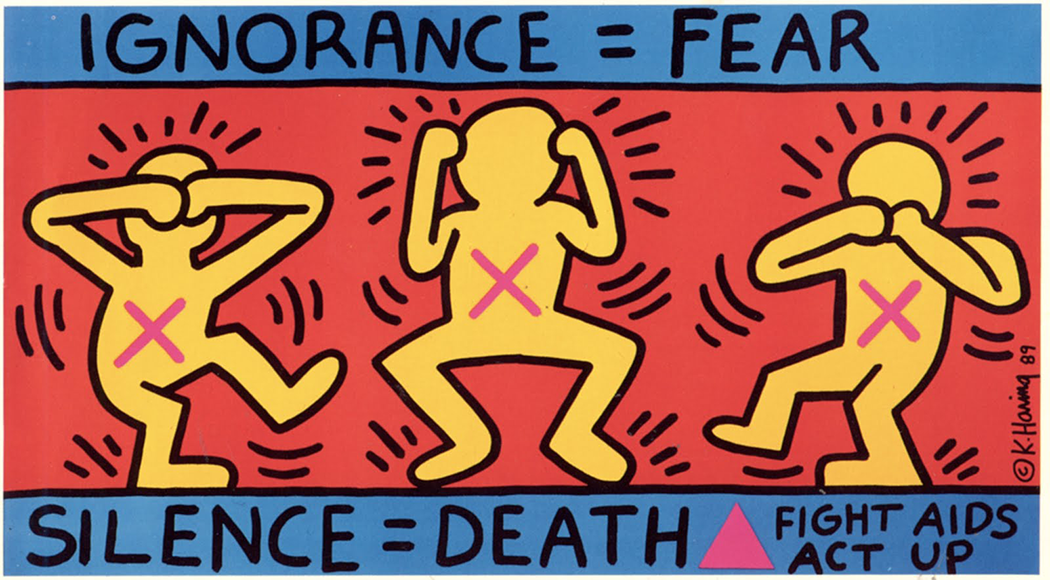 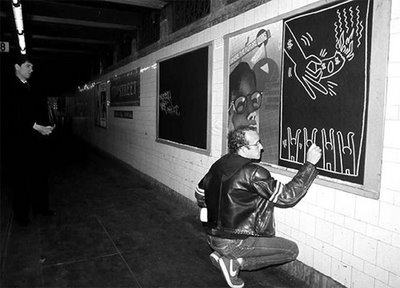 On February 16, 1990, at age 31, Keith Haring’s life was cut short due to an AIDS-related illness. He would have been 54 today and as a homage, here are a few words and a tribute to his most iconic pieces of art.

Having studied commercial art and then Fine Arts, he took a keen interest in graffiti art, Haring would go out there and paste collages of fake New York Post headlines on lamposts or news stands. He explored the likes of SAMO (Jean-Michel Basquiat) or Fab Five Fred (Fred Brathwaite) graffiti art to quickly put in practice his own interpretation of this form of art and would develop his future vocabulary of primitive cartoon-like forms. The Haring’s chalk-drawn “radiant babies” and “barking dogs” were born (see pictures) and woud become familiar sights on the matt black surfaces used to cover the old advertisements in the subways.

These chalk drawings in the subways of New York got Haring in the public eye and he would go on from there to have his first exclusive exhibition in the Tony Shafrazi Gallery which put together a retrospective a few years ago about it – see picture. Willing to reach a larger public, he immersed himself in popular American culture and befriended individials such as Andy Warhol, Madonna or Grace Jones (whom he would body-paint).

Haring was also a keen social activist and as a result of his ever increasing political involvement; he designed a Free South Africa poster in 1985 (see picture) and painting a section of the Berlin Wall in 1986 (see picture). Other works include design for Swatch watches or the Absolut Vodka advertisement (see picture)

Keith Harring’s work are just simply one of the best examples of how consumerism, popular culture and fine art merged in the 1980s.

Recommended readings
Keith Haring: The Authorized Biography by John Gruen (1991) includes interviews with the artist and those closest to him and is an invaluable source for understanding the art and life of Haring.

The early work is illustrated in Art in Transit: The Subway Drawings (1984) and Keith Haring (Shafrazi Gallery, 1982). An enlightening interview by David Sheff appeared in Rolling Stone (August 10, 1989).

Later an attempt was made to place Haring within a broader art historical context in Keith Haring, edited by Germano Celant (1992). □