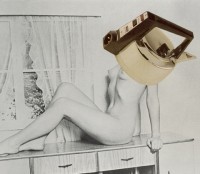 John Stezaker once said of Collage that it  “is a yearning for a lost world and reflects a universal sense of loss”. Those sentiments are certainly reflected in the work of artist and radical feminist Linder Sterling (also known as Linder). In her series Pretty Girls, Linder reacted to visual world she occupied, a society of inequality and the gender specific rhetoric. Linder used the magazines of the late 70’s and 80’s as her painters brush. Splicing images... Read More