Posted by Pierrick Senelaer on September 14, 2011 · Leave a Comment 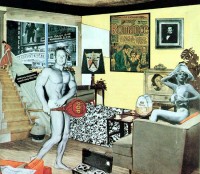 The sudden death of Richard Hamilton yesterday shocked a large number of people in the art world, tweets poured in and everybody agrees – it is a big loss. Some critics are convinced that he was the most influential and important painter post-war, others would defend the fact that he was the root of Pop Art. Whatever he was, and even if he got expelled from the Royal Academy Schools in his early years on the grounds of “not profiting from the instruction”, Mr... Read More