The sudden death of Richard Hamilton yesterday shocked a large number of people in the art world, tweets poured in and everybody agrees – it is a big loss. Some critics are convinced that he was the most influential and important painter post-war, others would defend the fact that he was the root of Pop Art.

Whatever he was, and even if he got expelled from the Royal Academy Schools in his early years on the grounds of “not profiting from the instruction”, Mr Hamilton made his mark in the dense art world and will be remembered for decades if not forever. Here is a tribute to him, here are some of his most iconic works.

Hamilton was known for his paintings, sculptures and collages. Collage is what we will be looking at first and in particular his piece entitled Just What Is It That Makes Today’s Homes So Different, So Appealing?, made in 1956 and regarded as the first statement of Pop Art.

A bodybuilder holding a lolly with the word pop on it makes the focus of this piece. This work was part of the This Is Tomorrow show held at the Whitechapel Gallery. A great artist was on route and he was going flat out.

Just What Is It That Makes Today's Homes So Different, So Appealing? by Hamilton

Richard Hamilton then went on getting various assignments where political views were expressed but more importantly he met Marcel Duchamp, became friend and curated the first and to date only British retrospective of Duchamp’s work that was held at The Tate in 1966.

He produced at the same period a series of prints, one of them being Swingeing London inspired from the arrest of Fraser’s and Mick Jagger, for possession of drugs. He then carried on on the pop music scene subject and produced the cover design and poster collage for the Beatles’ White Album

Here is what the artists had to say about this cover: “I thought it would be appropriate to present an album that was just white. Paul was doubtful about it being completely empty so I suggested that it would be fun to number each copy so that it would have the appearance of being a limited edition. I asked how many copies the band expected to sell, and they said about eight million. I made a quick calculation that we would need seven digits.”

After meeting a series of pop artists in America in the late sixties, he moved back to his native country, the UK and in particular in Oxfordshire where he produced a series of paintings and installations where artwork and product design mixed. This period was very fruitful but has always been disregarded and undermined by the series of works he will put out there in the eighties where the focus point was the conflicts in Northern Ireland – another example of Richard Hamilton’s recurrent interest for what was going on around him during his time.

One of the major piece of this period was The citizen part of a trilogy of paintings (1981-83) shows IRA prisoner Bobby Sands portrayed as Jesus, with long flowing hair and a beard. Republican prisoners had refused to wear prison uniforms, claiming that they were political prisoners. Prison officers refused to let “the blanket protesters” use the toilets unless they wore prison uniforms. The republican prisoners refused, and instead smeared the excrement on the wall of their cells. Hamilton explained (in the catalogue to his Tate Gallery exhibition, 1992), that he saw the image of “the blanket man as a public relations contrivance of enormous efficacy. 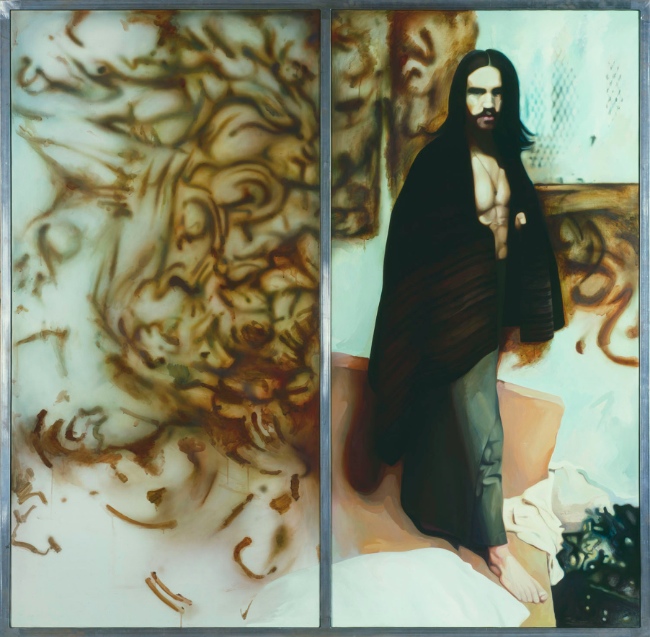 The Citizen by Hamilton

Richard Hamilton was working on a major museum retrospective, let’s just hope it can be carried over and happen anyway.