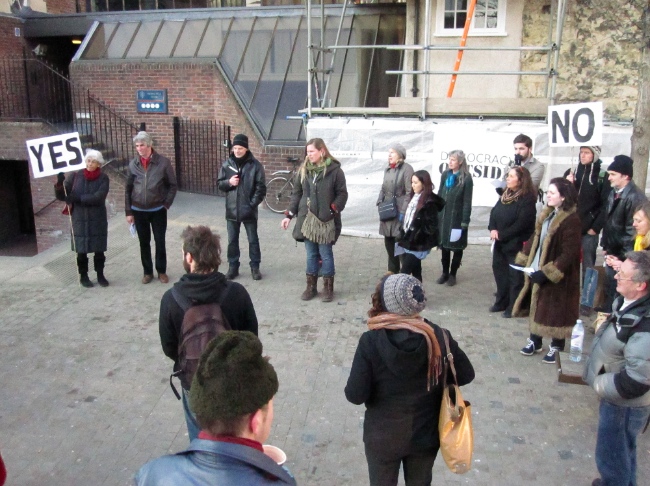 Democracy outside or street performance that blurs the boundaries of art and activism, and makes social movement real

A group of people show up in a public space with a banner, placards, leaflets, and a loudhailer. Two people each take a placard and stand a few feet apart, stretching the banner between them. The group stand between the placards, and one person calls out a question about a current political issue through the loudhailer. The huddled people look at each other, and start to move, some towards one placard, marked ‘No’, some towards the other, marked ‘Yes’. The loudhailer is passed around and people take turns explaining their point of view. As the dialogue progresses, people move about, shifting their positions. Slowly passers by gather and join in, and the space for re-imagining democratic exchange grows, as we open our imaginations in response to one another’s questions and reflections, and play at politics together.

Opening up public space is right now more urgent than it has been for some time. As the journalist Anna Minton has documented, we have seen an increasing and increasingly rapid privatisation of public space over the last decade or so, – it as as though we are witnessing a 21st century wave of enclosures. In Oxford, where Democracy Outside was first developed and performed, Bonn Square  in the city centre has been declared a ‘licensed venue‘ , so that spontaneous public art and political protests are no longer legal there. The irony is strong: Bonn Square, the traditional site for political gatherings in the city, was named for democracy after the capital of the new West Germany when the two cities were twinned in the early cold war; it hosts the city’s war memorial listing men who died in the first world war too young to vote when the franchise stood at 21; and today it’s the preferred ‘hanging out’ location for excluded, disenfranchised youth who feel unheard and ignored.

Street art has long had a vital role to play in opening up public space. Yes, it brightens up a dull place, but it also demonstrates that it is possible to think beyond what is presented by the authorities. Engaged performance can go further – breathing life into an anaesthetised space. Participatory performance, involving the spectators as performers, as actors, goes another step further still. So much public space has been etherised, deadened, and depoliticised – whether through privatisation or, as in Oxford, through deliberate attempts to stifle and ultimately mute spontaneous expression. People using such spaces become numb, paralysed, stupefied.

Democracy Outside shows a way to change this – in Democracy Outside the spectator / participants break the stupefying spell, activate their imaginations and themselves, and with their voices break the silence. It opens up the public space and invites the public in to experience the possibilities for open democratic dialogue – and to feel how it it is to literally change one’s point of view – to break free of the old back and forth, black vs white of prescribed political exchange.

The artist Shelley Sacks has offered a redefinition of ‘aesthetic‘ as meaning ‘enlivened being’. The challenge is to create, in our anaesthetic public realm of commodified communication, de-politicised debate, and deadened senses, a place where people can be in this (beautiful) state of awareness and connectedness.

James Baldwin said “artists are here to disturb the peace”: if peace means the peace and quiet of deactivated, desensitised space, then this has possibly never been more necessary than it is at this moment in time. Artists and creators – we have a job to do! Let’s do Democracy Outside!

Democracy Outside is touring England in June and July – for more details and to join the dialogue online go to https://network23.org/demo2012/.