Struggle in the Moment of Difference

I recently interviewed London artist Shireen Qureshi for This ‘Me’ of Mine.  Her ‘Untitled Nude’ is a compelling expression of the struggle in the violence of existence; of being flesh and bone.  We discussed an interesting point of the Deleuzian ‘event’…

Jane Boyer: Deleuze suggests we are an event; meaning that out of a chaos in which conditions have come together to form a ‘one’ or have passed through ‘a screen’ which allows something rather than nothing to happen.[1]  There is a sense of ‘event’ in your tableaus and the figures are that ‘event’, as if we are witnessing the coalescing of a self, how do you see this?  Do you feel the passage of time is relevant to the self?

Shireen Qureshi: It is interesting that you suggest that we are witnessing the coalescing of a self in my work because in my mind I am more interested in breaking down the body, of rupturing boundaries. I often initiate a painting by making it look real and then trying to break it down, by overlapping bodies or breaking apart skin and bone, I suppose in that sense the aim for me is towards chaos rather than from it. But I think that this is a very interesting idea, especially the sense of an ‘event’ you describe in my work, forcing my viewers into the role of witness. I think that if the paintings have created any sense of inescapable drama pinning both my figures and viewers in place, then this is an achievement in itself. From my point of view, the passage of time is interesting because it is within a space of time that metamorphosis and transformation can occur. I would like to create a sense of movement, an undulation within each of my paintings as if they were bubbles of captured space and time. I think that time is inescapably relevant to the self because it is within time that a self is built or deconstructed, subjected to the violence of existence, and within which the self moves, inevitably, towards death. 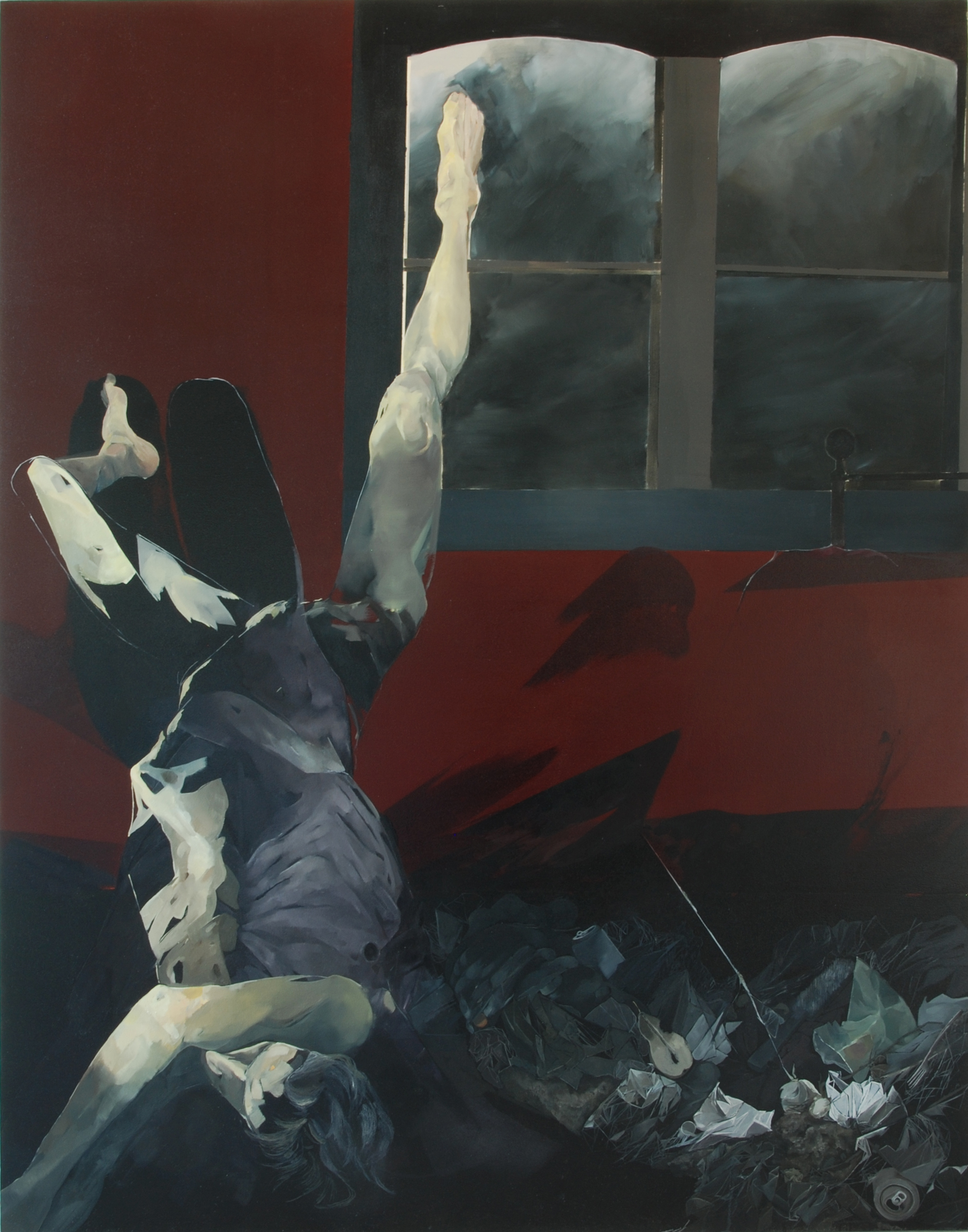 Whether we think much about it or not, we live every moment of our existence  with the thought of our extinction – every one of us could cease to exist at any moment.  This latent threat is one aspect of the ‘violence of existence’ mentioned by Shireen.  From her point of view the violence exists in the visceral reality of living in flesh and bone, a violence we understand first hand.  Often through serious illness or accident, the loss of loved ones or violent personal threat we realize the fragility of our existence and the latent threat of our extinction become a conscious reality.  Once aware of this imminence our sense of self undoubtedly alters; we become a self with limited time.

The visual breakdown of bodies, flesh and bone is an interesting interpretation of this psychological awareness of our mortality.  The ambiguity of whether the bodies in Shireen’s paintings are coalescing or breaking down is indicative of the struggle in the moment of ‘difference’ described by Deleuze, and as such, is also the ‘violence of existence’ Shireen speaks of. Deleuze said, “Indifference has two aspects: the undifferentiated abyss, the black nothingness, the indeterminate…in which everything is dissolved – but also the white nothingness, the…calm surface upon which float unconnected determinations like scattered members: a head without a neck, an arm without a shoulder, eyes without brows. The indeterminate is completely indifferent, but such floating determinations are no less indifferent to each other.  Is difference intermediate between these two extremes [the undifferentiated and the determinate]?  Or is it not rather the only extreme, the only moment of presence and precision?” 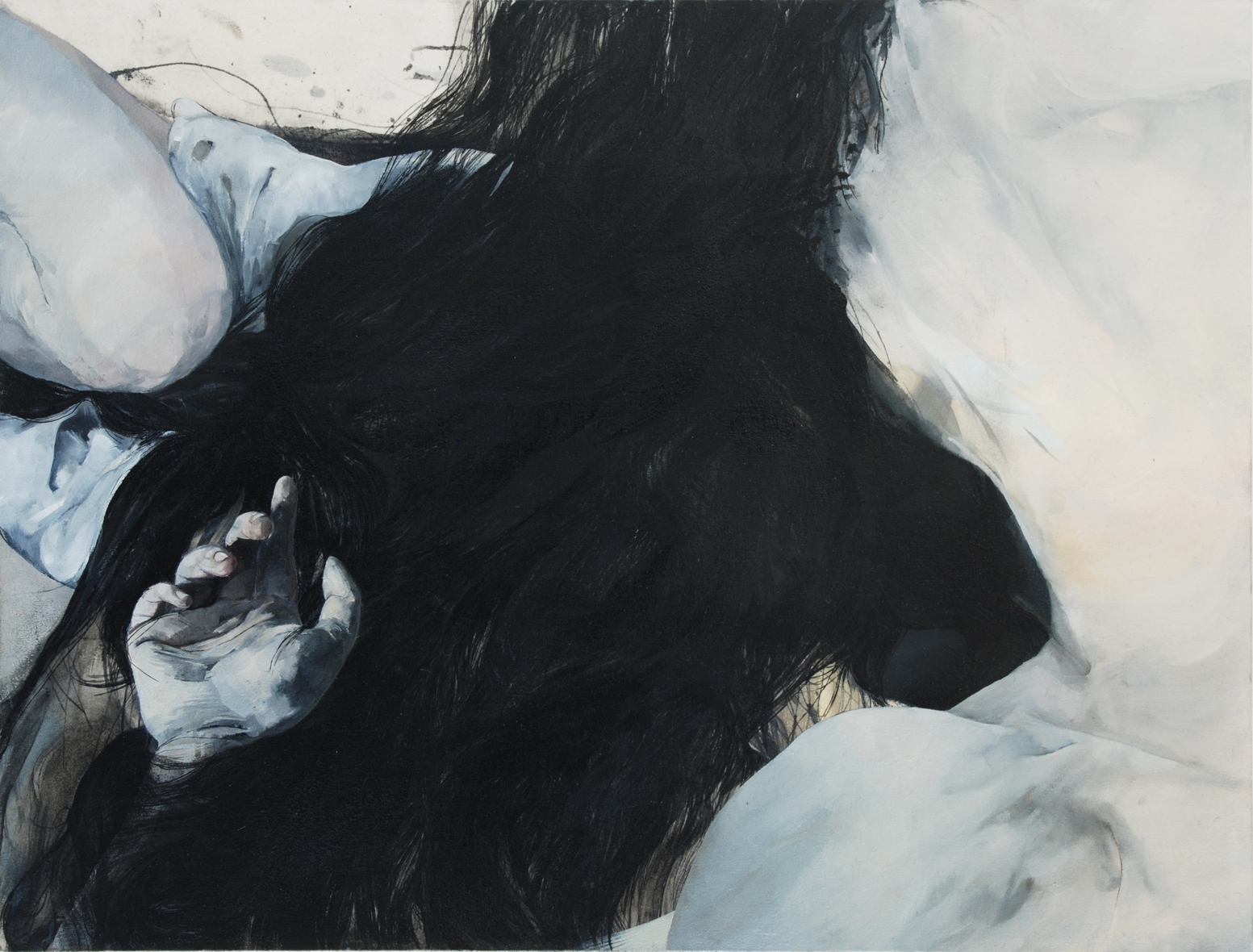 He continued, “There is cruelty, even monstrosity, on both sides of the struggle against an elusive adversary, in which the distinguished opposes something which cannot distinguish itself from it but continues to espouse that which divorces it.”[2]

Living is difference; it is the precision of presence.  Living with the imminence of our extinction is the violent struggle of divorcing that which continues to espouse us; a struggle “within which the self moves, inevitably, towards death,” as Shireen says.

Read more of our interview, ‘Straight from the Nerves’ on the This ‘Me’ of Mine blogsite.

Filed under CONTEMPORARY ART, INTERVIEWS · Tagged with Gilles Deleuze, Shireen Qureshi, Straight from the Nerves, This 'Me' of Mine

One response to “Struggle in the Moment of Difference”