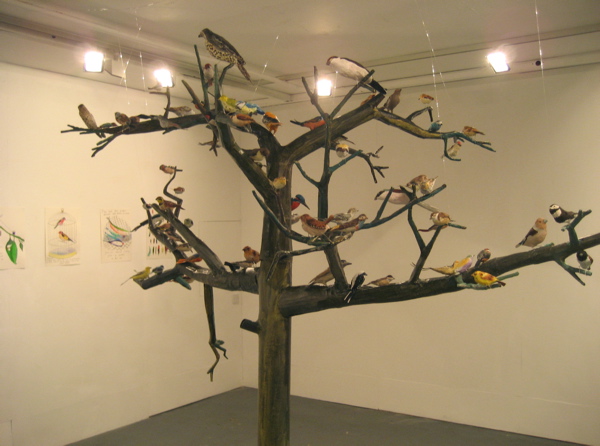 “Fairy tales challenge the reader to imagine magical worlds different from our own. We are reminded by the fairy tale of the thing we never should have forgotten — that our world might have been different and is magical the way it is: unexplainable, unpredictable, wild, and surprising. With our imaginations awakened, we can see with new eyes our own world filled with wonder once again.”[1]

There once was a girl, some said she was blue, some said pink, but the sparrow outside her window knew. She was iridescent.

The sparrow had seen many yellows fatten to red and be swallowed whole by the worm-mother, but he loved it best when the worm-mother let loose the pearl. The pearl was always different; she was a crescent, a mysterious creature that changed shapes. There were many crescents, sweetsacs that fell and turned into whisperers, featherwash which appeared when the sky was heavy and sparkled when the yellow came out from behind the heavy, but his favourite was the pearl.  Sometimes the pearl hid and would not come out, sometimes she laid bare her beautiful pearly skin and shone with exhilarating force, this made the iridescent girl come to her window and the sparrow would see her shimmering colour. The girl would breathe deep the scent of the pearl and she would leave gifts of her copper strands for the sparrow. The sparrow always repaid the girl’s kindness with gifts of his speckled feathers. Sometimes he would leave pebbles that looked like the pearl.

The sparrow knew the girl was pleased with his gifts because she would study them intently, then she would make another one appear by tracing their outline with a stick! The sparrow thought it a very clever thing to do.

This little fairy tale is for Annabel Dover, a fellow fairy tale lover. I interviewed her recently for This ‘Me’ of Mine:

Jane Boyer: On your website you describe yourself as constantly being “drawn to objects and the invisible stories that surround them; [t]hrough their subtle representation…exploring their power as intercessionary agents that allow socially acceptable emotional expression. The work presents itself as a complex mixture of scientific observation and tender girlish enthusiasm which often belies their history.”  That is a wonderful compendium of mystery, fact and fascination.  Do they share equal weight in your explorations?

Annabel Dover: I really enjoyed the show ‘Life or Theatre’ by Charlotte Salomans. It showed a very personal, fabulous fantasy representation of her life.

My upbringing was constructed from lies and my parents indulged in their own personal dramas. The truth was impossible to decipher and the objects that surrounded my sisters and I were often the only witnesses to ludicrous acts of fantasy and violence – the Freemason’s case with a bag of un-hewn rocks, a sign of dishonour; the naval coat with the buttons ripped off, indicators of an affair that my father had with a Naval officer; the college gown of my sisters’ father, an alcoholic professor; the love letters of his father, Canon for the BBC; the jewellery that represented both my mother’s and my grandmother’s love affairs. These and many other objects highlighted the traumas and the breaks in human relationships that made up the atmosphere of my upbringing. The stories told to me by my family unravelled with the discovery of these indiscreet objects.

The personal stories people tell are fascinating to me, they announce who they would like to be and often contrast with how others might perceive them to actually be.