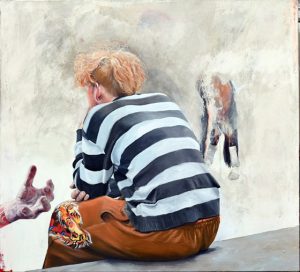 Chris Stevens is a painter with the firm belief that art is a marriage between concept and technical accomplishment. The process of making a painting is as much a part of the work as the finished piece. Challenging our preconceptions about people, this is an artist who explores current identity, class, race and gender.

Recently he co-curated ‘REALITY’ at the Sainsbury Centre, an exhibition that brought together over 50 works celebrating the strength of British painting. Some of the best and most influential artists of the last sixty years were exhibited in the show – key figures of the 20th century such as Francis Bacon, Lucian Freud and David Hockney.

Having studied Fine Art at the University of Reading under Terry Frost, he has exhibited regularly since graduating in 1978. A prize-winner in the BP Portrait Award, 50 over 50 and more recently in the Painted Faces exhibition organised by the Saatchi Gallery and Windsor & Newton, he has also undertaken Arts Council residencies at Sunderland Football Club and Birmingham International Airport.