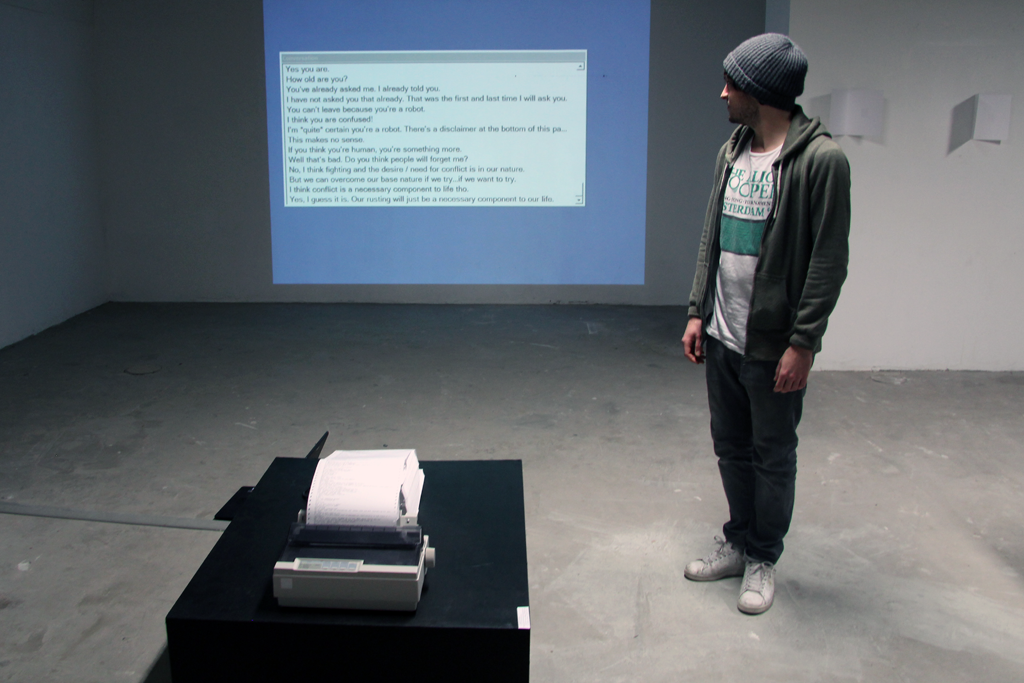 Gaston Gouron is a visual media artist based in Brussels. His work caught my attention at a show about art books. Not by surprise, yet I think more by design, I had picked out each of Gaston’s three artworks on display before swooping in to catch a word with him. I arranged to meet two days later in Bar De Matin – BDM to those in the know – a chatty bar in Place Eugéne. I went in with having noted down a few choice questions and also the book ‘The Secret War between Downloading and Uploading’. I’d intended this as a visual prompt to get us going on a Sunday morning. Luckily too we’re both keen on our coffee! Gaston launched in by telling me that notorious mega-uploads site had just been killed-off by the US government’s new anti-piracy laws.

‘Tutt!!’           He mentioned also the group called Script-Kiddies who work anonymously, and how he was fond of subverting the hacking potential of freewares like Keylogger to the advantage of as a tool for making artwork. He also threw in the word Caviarder – but not to be cast aside, really that word defines Gaston Gouron’s working process – which for him is to make things in a simple way or with no design.

Maybe this makes him a censor of what he considers to be an over-design of things? I asked him how much he thought his work to take refuge in and show hallmarks of the graffiti artist – expressive, edgy, playful? Here is the interview.

GG: It’s totally process driven, and it’s about finding a moment when something flips into being interesting, no; in fact, amazing. I do this on the web, chasing links that may have been sparked by a conversations with friends or a hangover from a previous idea.

Never-ending Conversation comes off the back of me buzzing around the internet and settling on something amazing. An example is when I discovered Chatbot, a web-based AI that you can talk with. I like to have fun with things so I was cutting & pasting text between the two conversation boxes to see how absurd it could be. But instead, Chatbot was sufficiently intelligent enough and made responses to expressions how you’d expect a human conversation to go.

That conversation became the default material I wanted to work with for one of my projects. As a bee might extract and pollinate, I wanted to do the same. Taking from one place and have it settle in another. Pollinating might be stretching the bee analogy too far though. It’s not that serious, really I’m simply interested in making things feel new.

PW: The artwork which you called Never-ending Conversation is very sculptural and invades the exhibition space but also plays with text that came literally out of thin air (or more aptly, it came virtually from the chatbot’s AI). So, how do you deal with the ‘real’ and ‘virtual’ and did that affect the way you chose to exhibit the artwork at 50 Livres d’Artistes?

GG: On the one hand I’m not proud to see the work presented. In reality it should appear more disordered. I created the original version in my bedroom which is more a workspace. I’m a collector too, collecting documentation about programming language and old network cables.

In a more common workspace environment Never-ending Conversation looks more ‘gutsy’ – how you’d expect a living machine should be. But when I saw it set-up in the exhibition space it looked, well… Naked! but I understand that the conditions – or restrictions – between workspace and exhibition space are very different.

In the stark, brightly lit – and clean! – exhibition space of ARA (a space with an orthodox for presenting aesthetically-biased artbook artists) I imagine my work is more readable to an audience. But It would be a great idea to have the work redone – simply to make the sprawling technology in the sculpture more obvious, revealing more about how it was put together. I’m really aware that I don’t want to conceal any part of the process.

PW: Which technological forms tend to produce the best renditions of language or ‘text-sampling’ that you’ve seen recently?

I prefer reading rather than to listen to spoken words.

It’s strange I know, but more recently I’ve been understanding why my work borders on being seen as simplistic – which is a good thing. One thing is knowing about a study a friend sent to me. It shows that we read in contours – going from the corner of a page to the centre. So I think I’m interested in written material. Then I think about if it should be offered up as a bound-book, a pamphlet, a techno-language-sculpture. These are vessels and simply carry the language, I’m not even sure they’re that an important part of the process. The finding and discovering is more what I’m into.

PW: What’s interesting or peculiar that you’ve discovered about the ins and outs of language when you’re thinking how it needs to appear in or affect a piece of work?

One other thing is that using the French language this might make my work appear to be more exotic and specialist. It’s the opposite – I want to hit on an international crowd with an equally international language and for them to read the words. If they admire the vessel in which it’s concealed, then great, but for me it’s about getting the language to speak for itself.

PW: Who has done the most, or been most instinctive, in making the printed word part of their bank of visual language?

GG: I have several references. I would say the graphic works of Marcel Broadthaer’s and he’s Belgian. Japanese artist On Kawara is a big inspiration. He made two books retracing one million years – making the words and numbers from the dates into material – which then could be bound in a book, spoken out aloud and painted on a canvas (then, showing me on the screen of his laptop) like this.

I also can’t forget North Amercian artist Ed Ruscha for his famous graphics and text paintings. In England there’s Daniel Eatock – I love his work; well more than love. It’s his approach – easy and efficient. Then there’s Vaska who is Eatock’s founding partner of the web-building-platform Indexhibit. He came into my school last year. Working together they made the most clean of interfaces.

PW: ‘Artbook’ as a category seems an anathema to your visual language because you’re looking for ways of re-doing and re-showing printed texts. I can see a binary to the way you bulk-up on language and downplay the format (or vessel as you refer).
You serve-up things leaving the text in it’s raw elemental form – to fend for itself. So, how do you think your work relates to the ready-made, or made-ready?

GG: I produced Never-ending Conversation on a course I was studying at Lacambre Artes Visuels in Brussels. It was only 3 months and the course was refreshing because of the trans-disciplinary interests of the students I was studying with. Everyone doing this short-course was coming from a bigger discipline including design, photography, typography, urban space and for me it’s graphic communication. A bias is coming in too from a fine-art background but I’m also a programmer.

The tutors were really supportive an encouraged us to explore ideas. It’s completely energizing to share ideas with such a diversity of artistic personalities.

My work relates to the ready-made in process really. I do things to get rid of some idea – maybe to bank them so I can buzz on the next amazing discovery.

PW: We could go on, but thanks Gaston for the giving a nice twist to thinking about the how artbooks can still be brought to life beyond the printed and bound page.

Gaston Gouron is currently writing his transcript for application to RCA, London.