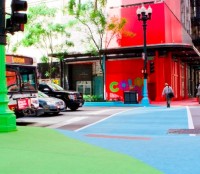 At last there is something for the “looking down while walking” individuals. There is a good reason to ignore your siblings, there is the new work from Jessica Stockholder to look at. “Color Jam” is the name of the installation and is a make-over of State and Adams streets in downtown Chicago. A flow of colors have landed on the concrete and are licking the surrounding building. Orange, lime green and turquoise shapes seem to wait for the bypassers in the... Read More 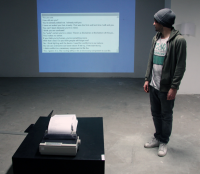 Gaston Gouron is a visual media artist based in Brussels. His work caught my attention at a show about art books. Not by surprise, yet I think more by design, I had picked out each of Gaston’s three artworks on display before swooping in to catch a word with him. I arranged to meet two days later in Bar De Matin – BDM to those in the know – a chatty bar in Place Eugéne. I went in with having noted down a few choice questions and also the book ‘The Secret War between Downloading... Read More 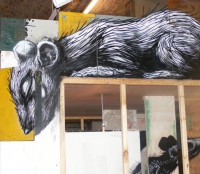 On my way to BRP (Black Rat Press), I knew I was up for a treat. I knew I would hang out for a while and enjoy ROA’s installation. What makes ROA so popular is definitely his unique style – (very often) large black and white scale wildlife animals made of spray paint but also his ability in putting together quite clever installation integrating his wildlife characters. Flip out/ flip in some wood panels or just walk round and get a new angle on the installation and... Read More