Pam Glew is a well-established, contemporary British artist, best known for her unique bleaching technique on fabric, vintage flags, and handmade vintage quilts.  We’ve written about her previously and are excited to again with her fourth London Show since 2011, Wanderlust Hotel. 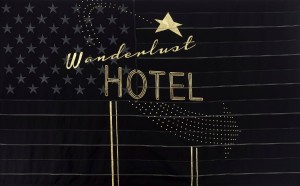 Inspired by the goings on in legendary hotels such as Chelsea Hotel and Hotel Marmont,’Wanderlust Hotel’ is a fictional guest house frequented by illicit overnight guests and dark secrets. Self-staged photo shoots make up the majority of the subjects.

Populated by the weekend girlfriend, the bride, the maid, the mixologist, the sleeping porter, the receptionist and the VIP guest all swapping roles and sweeping in and out of the pictures frames.

Formerly trained in Theatre Design, in this series the artist explores an imaginary world; a fictional hotel, an invented environment and a narrative where the players in the hotel encounter each other within the hotel. The archetypes are empathetically reflected on in the Bellboy sleeping, and the melancholic maid, sometimes humourous (the Call Girl on a visit to Vegas encounters the ‘Glitter Gulch’ signage), and turned on their head (the bride has a revolver, who is also the same model as the call girl). 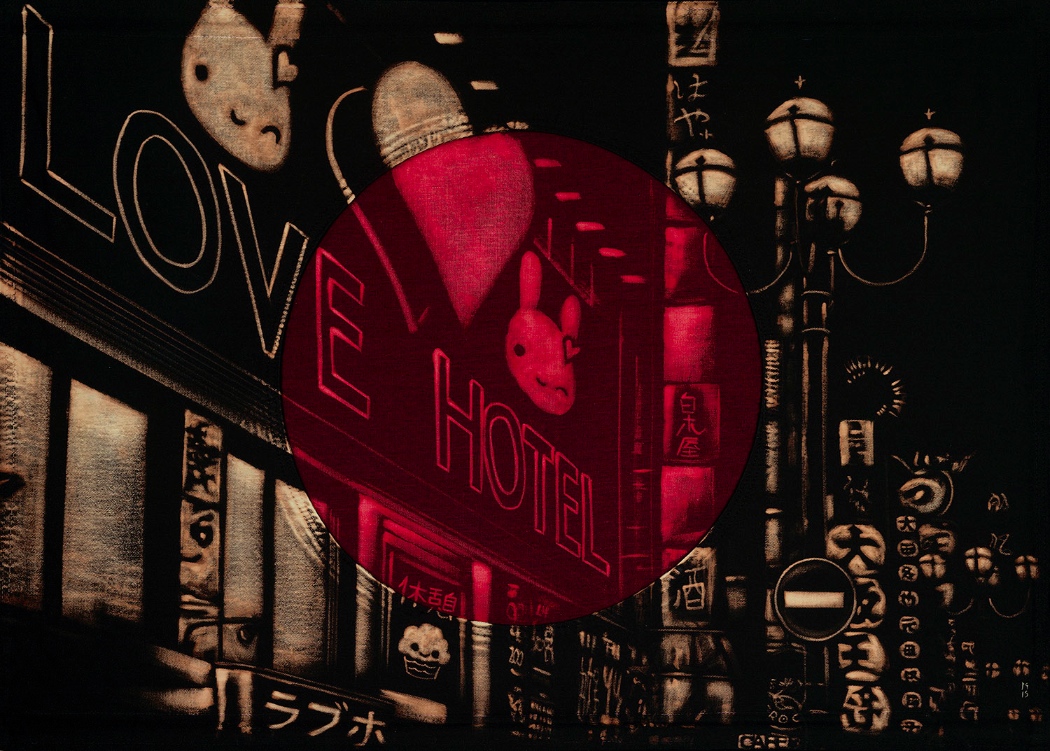 Acting is a common theme, and the ‘play’ idea is explored in the miniature hotel model. Here the hotel is bereft of people as if the residents are now only present in the paintings. The models in the work occupy more than one role, as a metaphor for how fate and luck play a part in our lives. In ‘Sisters’ the artist explores a meeting of 2 estranged identical twins. One of which is the maid, one the VIP. An imagined rift is between them as if they have not spoken in years. The heavy quilt is embellished with swarovski crystals which appears to elevate the characters appearance, the maid’s headpiece appearing more like a crown.

The medium Glew uses is dye and bleach. The use of fabric, and dyeing, washing and sewing is used as a metaphor for ‘women’s work’. Glew celebrates women in the history of art who have been overlooked due to an element of ‘craft’ in their work. Sourcing antique and vintage american quilts and national flags, the fabric of the work is as important as the image itself. Using quilts to insinuate sleep and slumber, the textiles are rich in both history and texture. Decontructing large American flags to just the stars they become less about the location and more visceral.