We came across these mind-blowing sculptures and could not resist sharing them with you. Defying gravity or just beautiful, you can decide for yourself. We hope you’ll enjoy them.

Why not telling us about them in the comments below?

Name: “The Immigrant Sculpture” by Bruno Catalano
Location: Portugal
Meaning:  Symbolizing luggage full of dreams but an empty heart, because you are leaving everything behind.

Name: “Hippo Squares”
Location: Taipei Zoo (Taiwan)
Meaning: The square is the brainchild of former zoo Director Chen Pao-chung, who came up with the concept while looking for ways to complement the African Animal Area. After consulting with employees and designers, Chen greenlighted the square and it went on to become one of the facility’s signature nonliving attractions.

Name: “River God Tyne” statue by sculptor David Wynne (1968)
Location: Newcastle Town hall (UK)
Meaning: It portrays the river God in human form, a fountain within his outstretched hand coursing a constant stream of water along the tortured and twisted torso of the aquatic diety. 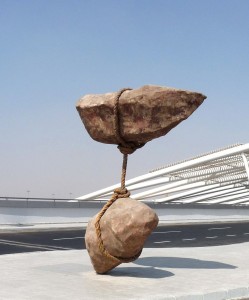