Okuda (Spain) and Remed (France) have renewed the symbolic sculpture located in the vineyards of the winery Campo Viejo in La Rioja, Spain this past week. The work entitled “A Bridge Between Sky and Earth” pictured by the artists was built in 2013 and became an icon for the wineries. Three years later, the sculpture is reborn with a new look, colourful and vibrant with the unmistakable graphic line of the two artists.

The renewed appearance of this large public artwork, more than six meters high, is a celebration of the Campo Viejo Wineries with the art and this intense collaboration of the two artists.

The fourth limited edition label of Campo Viejo Art Series range signed by Okuda and Remed, will be presented with the image of the sculpture as well. 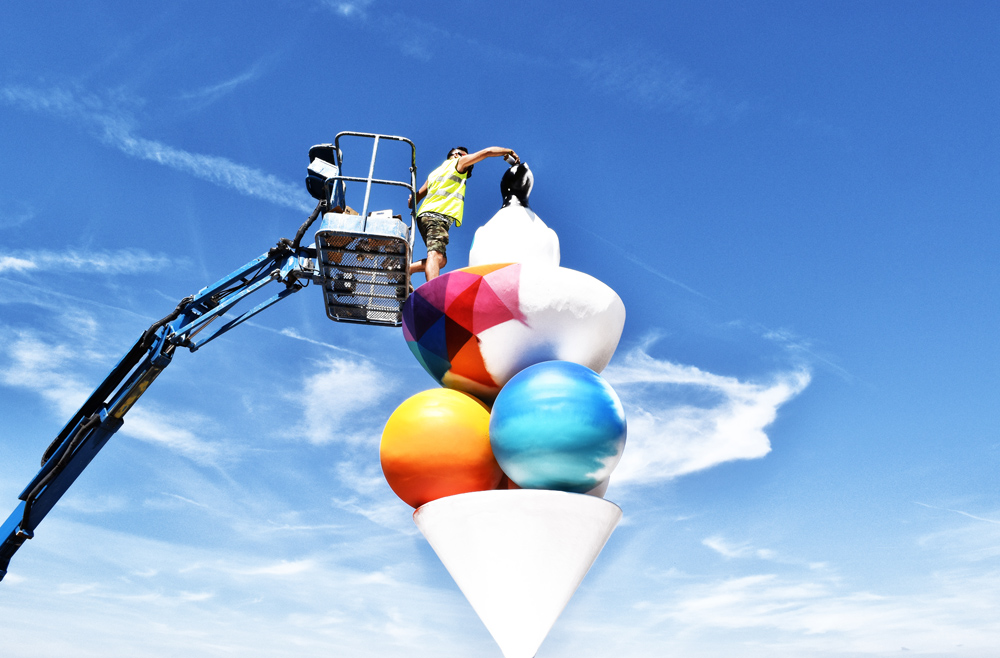 A long running collaboration between the two artists

Over the past four years we have had the opportunity to witness how this duo of artists, Remed and Okuda, has gradually created a lot of artwork and participated in several places around the world teaming up with Campo Viejo.

Places as diverse as Mexico, Miami, Toronto, Warsaw, Madrid, London, Oslo, Zurich, Brussels, Dublin… have hosted the multiple stops of the Streets of Color, Rioja winery project in which the two urban artists have created a recognizable style in which the bright colors and geometric shapes intertwine in a unique way. “It is like a third artist were born from the collaboration of our two styles.” Remed says.

This ongoing collaborative journey between Okuda & Remed with the Campo Viejo winemakers celebrates the expressive nature of the wines and the sculpture in the vineyards was the first work and starting point for all other collaborations that have emerged on the edge of the years between the renowned Pernod Ricard brand and the two artists.

The artistic collaboration is managed by the cultural enterprise Nobulo since 2012.

More about the artists

Remed (Paris, 1978) is an expressive French Artist based in Madrid who is well known for his bold use of shapes and colour and large-scale murals. He started painting in 1995 in the privacy of his studio in his home town of Lille, but felt limited by a canvas framework so quickly moved his art to the streets.

Born in Santander, Spain, in 1980 and based in Madrid, Okuda is a passionate and internationally renowned Urban Artist.

Okuda has developed over the years a unique style of artistic expression characterized as “pop-surrealism meets Urban Art”. He uses geometric, bright-coloured abstract shapes with interplay of grey bodies and organic forms to depict contradictions about existentialism, the fake freedom of capitalism, the war between humans and themselves, and the meaning of life.

Since 2002, Okuda has received international recognition and now gets invited to participate in group shows and art events across the world. He has showcased his work at over 56 exhibitions and his portfolio expands a range of mediums from conceptual mixed media installations and mixed media canvas to mural paintings and Street Art.

Ever since two local winemakers – Beristain and Ortigüela – created the first vintage in 1959, Campo Viejo has represented the expressiveness, colour and vibrancy of Rioja.

The Rioja winemaking region is situated in the north of Spain, in the heart of the Ebro valley. It’s the most important Spanish wine region and in its heart lies Campo Viejo.Campo Viejo’s winemakers work hard to ensure that Campo Viejo wines are the very best expressions of contemporary Rioja, conveying the vibrancy of the region in a way that is in keeping with the expressive, fruit-driven style which today’s wine drinkers are actively seeking.