I have always been fascinated by SCI-FI subjects like AI – Artificial Intelligence.

AI is real and it’s slowly creeping into our lives, so I should probably not assimilate it to SCI-FI.

But I ask myself – how far will AI go in controlling our lives?  Will it enhance them? Does AI mean the demise of the Human race – this is SCI-FI to me right now.

If you feel the same way, Stephen Oram’s ‘Eating Robots: And Other Stories (Nudge the Future)‘ collection of short stories may bring you answers, or clues, as to what AI might look like in 100 years (or less, or more – I do not know).

The author’s imagination about the topic is vast and will definitely make you think more about what AI will actually mean to us as humans.

From the ability to share memories with someone you love, to reseting us every 1000 years, and even the ability to choose which celebrity hologram will drive your driverless car today.

Stephen Oram goes from the very funny (which sometimes turns too silly for my taste), to the depressing and scary when it comes to AI, but why should it be one or the other.

Immerse yourself in these short stories and make up your own mind.

PS: Injecting some good old human anxiety into AI systems may be the answer for the fears we have. Described as the ‘anxiety loop’ by Oram, this sounds like a plan.

We at Art-Pie have enjoyed following the work of contemporary British Artist Dave White for many years. We are drawn to the energy of his explosive and dripping paint style, and moved by his primary subject matter of animals.

This November 4th – 28th sees Dave’s new show Critical open at the Loughran Gallery in Chelsea. Focusing on animals from the critically endangered list and near extinction, or the tiers just below, it’s the labor of an artist impassioned by the plight of animals.

The Art-Pie team had the pleasure of interviewing Dave this past September at his studio in Dorset, exactly half-way through the creation of his new collection.

Dorset in South West England is a landscape dominated by spectacular nature, and it is breathtaking. We toured his studio, conducted a very insightful interview, and saw prints from several past collections, including his recent shows Albion based on native English wildlife, and Apex which documents great white sharks.

“I love cities…. I am in London all the time but I can’t live there. I love Dorset. There’s a tranquility, a complete silence that just works for me. [It’s a] headspace that ….almost cements the 1:1 relationship you have with the medium that you work with…there’s no distraction for me. It’s just me, and that.”

We too felt the strength and power of the natural surroundings, and in learning more about Dave’s formal background as an artist, came to understand how it shaped the progression of his career. Dave graduated with a BA (Hons) in Fine Art (Painting) from Liverpool John Moores University, and was “blessed” as he describes, to be a working artist since his first show in ‘94 at the Royal College of Arts, which was his initial animal series.

Dave is an experienced artist of 24 years who knows himself, but has incredible humility.

“You never ever stop learning. And the most important thing is, never ever ever ever give up, ever. The best advice I can give people is discover yourself. Don’t look at anybody else’s work. Just know in your heart and soul that you want to make something. [It’s ok to be influenced] Don’t become obsessed with other people’s work. Do your own thing. Do what makes you happy.”

Our drive to Dorset from London was stunning as we enjoyed the beautiful winding country roads, rolling hills with stunning coastlines, and multiple stops into the medieval ruins of several castles and churches. It was impossible to not feel the power of his environment, and the nature evidenced in his work. He told us his passion for animals comes from childhood, and how he still views them in awe with the “…same wonderment from being a child, amazed that we live in the same world.”

Dave describes his interaction with the wild animals in Dorset as “…blessed and lucky that I see almost daily stags, foxes, owls”. That influenced him to create his Albion series which focused on native English species, and really cemented his incredible affinity for animals. The more research he did, the more his passion grew, as he realized so many of these animals are being pushed to brinks of extinction. He described his shock at headlines touting articles like “40 Million Mobile Phones Sold in the Last Quarter”, while the demise of entire species attracts so little attention.

The depiction of animals has been a near constant throughout Dave’s career, allowing him witness to the forefront of their sad demise. So many factors have contributed but the crux is modern times; Dave cites climate change, habitat destruction, and hunting amongst others. While maybe not intentional, Dave’s work has come to immortalize these animals. Brave use of color, eyes that jump off the canvas and grab the viewer, it all comes together to heighten their heartbreaking destiny. Dave’s shows such as Natural Selection, Apex, Albion, and now his greatest effort yet Critical, raise this awareness.

While Dave described how the peace and inspiring nature of Dorset allows him to connect with his craft, he admits “I would never paint in silence”.

Dave told us excitedly that he enjoys an eclectic variety including Jazz (his father was a jazz drummer), finds himself stuck in an old-school time warp of ‘91 – ‘02 hip hop, and loves ‘93 – ‘07 jungle, and drum and bass.

However more than any other style, it seems Dave is moved to his core by classical music which he feels “approaches perfect“, describing the extreme volume as he would “...blow my head off in here, playing Appalachian Spring by Leonard Bernstein”.

Dave approaches his painting as a serious craft and a consummate professional. He told us multiple times, “You’re only as good as your last piece.” Arriving at his studio by 7am, he fully prepares himself before he starts the work. Does the sketch, lays underpaints, mixes his colors. But then he loses himself in a zone he likens to a meditative state. He locks the door, he is completely unattached to thought, and that is how he produces, “….its an organic process”.

“I don’t actually think about painting when I’m painting, at all. ….I just basically know I need to do this, and do that, and how I get to the end I have no idea. I just go into a zone, ….it’s just a spontaneous thing. And I guess the older I’ve got, the more personal it it for me.” 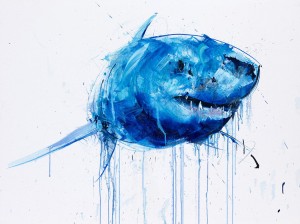 We were curious about his inspirations, about the artists he admires and why. Japanese artist Takashi Murakami was his first mention, describing “I love his color, love his palette. When I saw them in the flesh, it literally blew my mind. …It’s an incredible skill to be able to put down what he does, the way he does… and it looks almost like it’s a print.”

We discussed Murakami’s long-standing collaboration with Louis Vuitton, and Dave described the partnership as “incredibly brave on both sides. Collaborations work if they’re genuine, if they aren’t one-sided and they are the best of both”. Dave speaks from experience as he has past collaborations with Nike and Jordan, as well as MTV.

Dave went on to describe his greatest admiration for Van Gogh, “A man who did it his way, tried to fit in with convention, but said you know what, fuck it. I’m just going to do what I do, and I’m so blessed to be able to do it.” Dave revealed his personal affinity for that, and how he’s read his diaries and is “…completely blown away by him”.

Dave described his second favourite artist to be Picasso:

“A man who reinvented himself throughout his career. The best work is that he did before he died, when he’s 80 years old. ‘I live in a castle. I’ve got a pet owl living above me. And I’m just going to paint and really not care what it looks like.’ There’s a life, and a zest, and a kind of beauty in the naivete of those late works, and I love it.”

Animals continue to shape Dave’s career as he explores different collections over the years, but always with his signature style of explosive and expressive colors, vibrant and dripping. The plight of animals and their march to extinction upsets him greatly, and his style conveys the strength of that conviction, “I want people to be confronted by these things, and look at them as they are looking at it”. 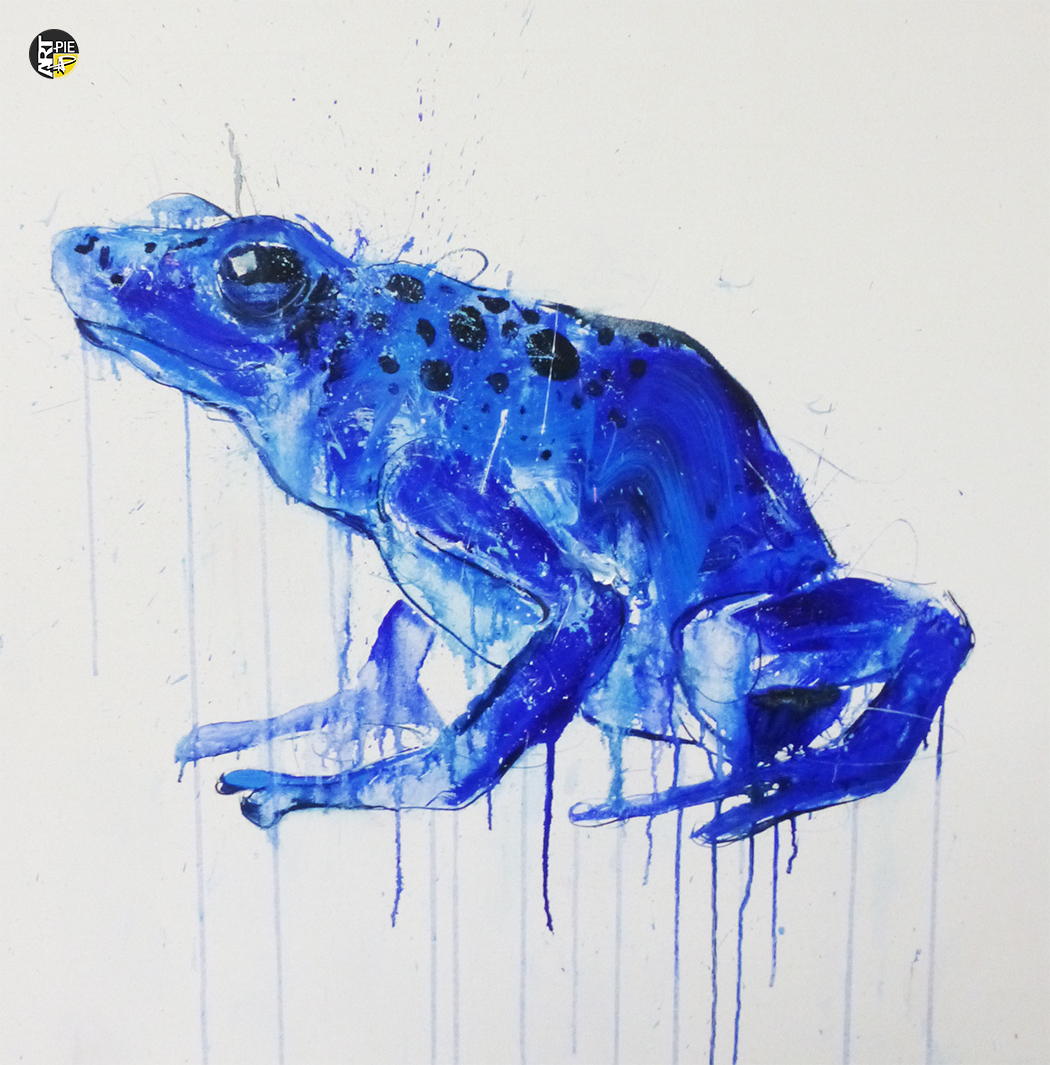 We support Dave and his artwork, and the message it drives to raise awareness for so many animals at risk. Dave offered much wisdom during his interview and we came to understand the heart and soul depicted through his paintings is very much his own. In parting wisdom, we leave you with this from Dave:

“Do your own thing. Do what makes you happy. Never ever give up. It’s not quick and there’s no formula. Produce things that are honest, true to yourself. High quality. Make the best shit you can. Do what is yourself, be yourself.”

You can find Critical running this November 4th – 28th at the Loughran Gallery in Chelsea.