Since the day we first saw Jonathan’s work in 2008 we have been amazed at how much it has blossomed and how many people have responded positively to his distinct and developing style. Since then several shows at Signal and exhibitions in Los Angeles, San Francisco and Denver have confirmed his international appeal. Jonathan has achieved that rare thing of combining socio-political subject matter, with a real sense of beauty and truth. Despite the evils in the world he depicts,... Read More

Posted by Pierrick Senelaer on March 3, 2011 · Leave a Comment 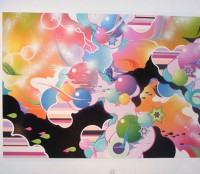 I managed to get to see the current group show at Signal gallery and I am glad I did. The shows called Mixed doubles presents works from Dan Baldwin, John Squire, Andrew Mc Attee, Sean Madden and Joram Roukes. While I am familiar with the first three artists mentioned, I did not know much about the two latter ones – Sean Madden and Joram Roukes and what a shame that is as these two have got very strong and powerful works on display. Joram Roukes – oil on canvas Like... Read More

Posted by Pierrick Senelaer on February 2, 2011 · Leave a Comment

In our first group show in the new Paul Street space, we are presenting four very interesting artists whose work links and entwines in very winning ways. It’s a fine match between the abstract and figurative ends of the painting spectrum. However, this is not a one sided game, but an exploration of overlapping skills and techniques, that will make excellent viewing, if not producing any obvious winners. Dan Baldwin Of the two strongly figurative artists in the show, Dan Baldwin... Read More