Remi/Rough and Steve More are leading a new school of post-graffiti artists and this will be the first UK exhibition to showcase the movement.

A is an exhibition at the forefront of an urban abstract movement whose roots come from a time before the hype of street art. Interest in this movement is steadily gaining momentum and Remi/Rough and Steve More are amongst its finest exponents. 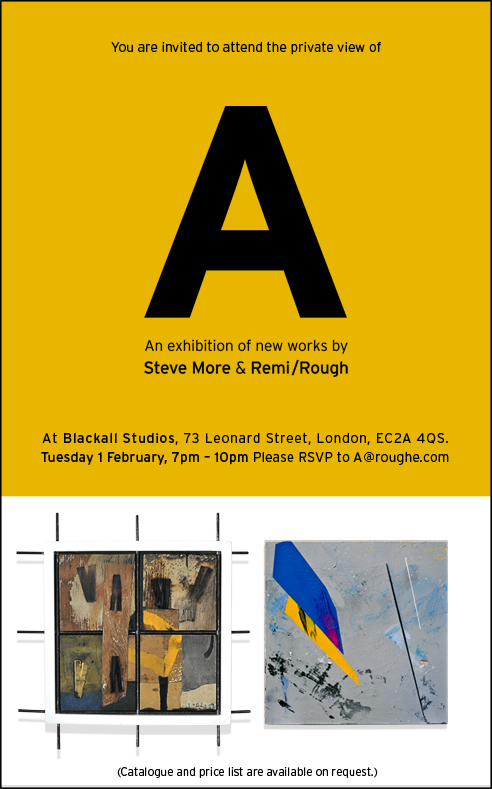 Remi/Rough and Steve More first met in the early 90’s and worked closely over the following ten years, playing a progressive role in the international graffiti art scene. Their focus on self-expression and originality whilst working in the urban vernacular has had a lasting influence on their own works and on the generation that came out of that era.

Like a handful of other artists of that era their work diverged but similarities remain highly evident. Notable members of this urban abstract movement include Marco Grassi (Milan), Jaybo Monk (Berlin) Retna (LA), Joker (Portland), Augustine Kofie (LA) LX One (Paris), Antistatik (Strasbourg) and Jose Parla (NYC) – all of whom are beginning to reap success with their work.

The title refers to their starting point of reshaping letters of the alphabet and integrating them into an urban context. It also refers to a new beginning – a reference to the Avant-garde, Abstraction and Alternative aspects within their work – all of which are central to their approach, reiterating a new interpretation and a new beginning for what was urban art as the urban abstract movement.