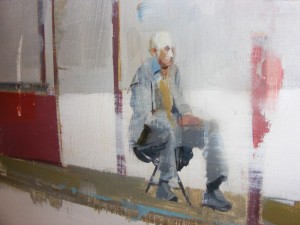 The works on display are part of the ‘Waiting’ series Brett Amory started back in 2001 in which he depicts morning commuters transiting via BART (Bay Area Rapid Transit) stations around San Francisco.

Here is what he says about it –

“I started the ‘Waiting’ series in 2000. I was working in Emeryville and living in San Fran, so I was commuting via bart. I became really interested in how people looked in the morning especially on Monday after the weekend. I noticed how everyone seemed to be somewhere else, not at all in the present. I also started noticing a disconnect. The bart would be packed shoulder to shoulder but there would be no communication and minimal eye contact.”

In his latest series and in this one on particular, the composition is minimal, the environment seems to fade away. The artist is trying here to give some emphasize on the guy waiting, to hopefully make him come across as something more than a waiting guy

The minimum composition in Amory’s works certainly makes you focus on the character, on the commuter. Look at it 3 feet away from the wall and it is difficult to fully realise what is going on, get closer and find out loads of details you just missed earlier, see the commuter differently. Amory’s works appear like some sort of mirages or hazed slices of personal stories, stories of these people in the morning waiting for their mean of transport, our story for most of us.