RETNA at The Old Dairy

Posted by Pierrick Senelaer on June 2, 2011 · Leave a Comment 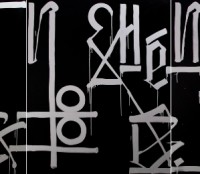 The Hallelujah World Tour is RETNA’s first solo exhibition in the UK. This show will present new works by Los Angeles based artist RETNA and will be hosted at the Old Dairy, London. RETNA mixed inspirations from Asian calligraphy, Incan and Egyptian hieroglyphics, Hebrew and Arabic script to traditional UK gang style graffiti writings seen since the 1970’s in Los Angeles . Where – The Old Dairy | 7 Wakefield St | London |WC1N 1PB When – 9/6 till 27/6/2011 | Tuesday... Read More