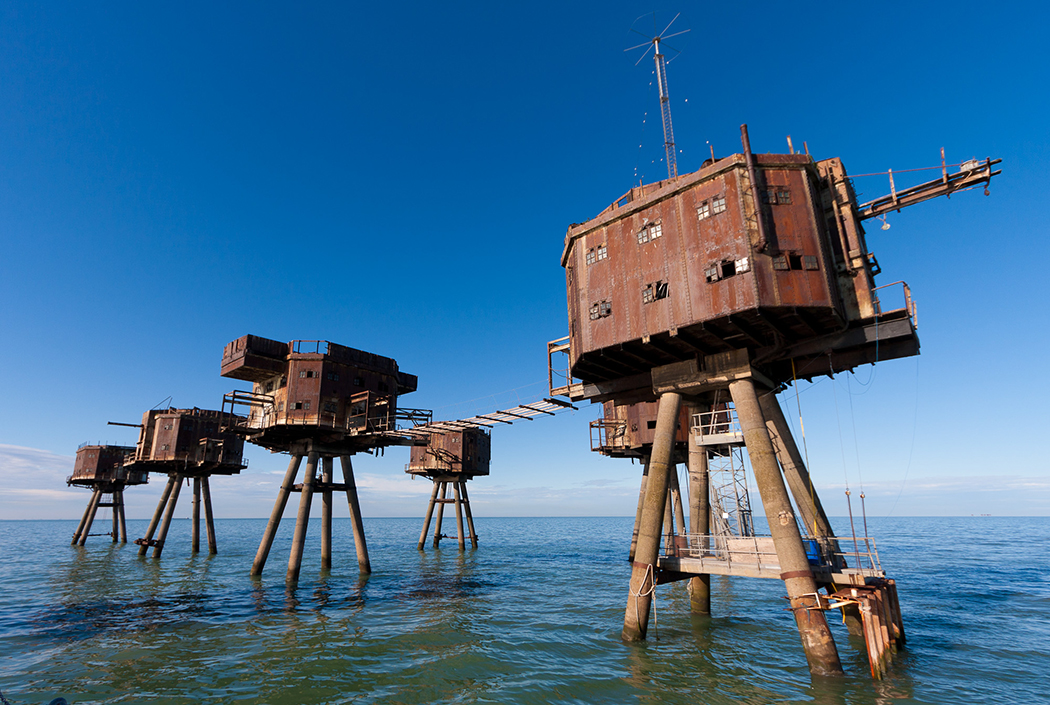 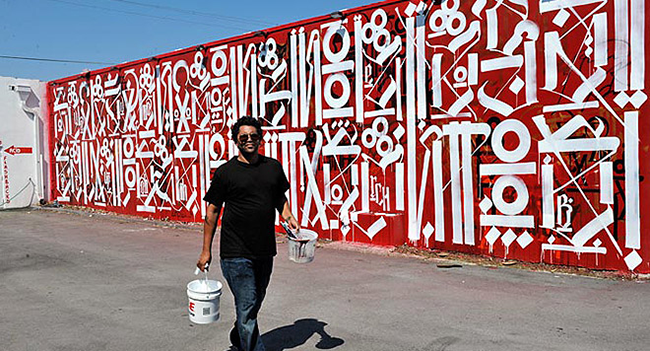 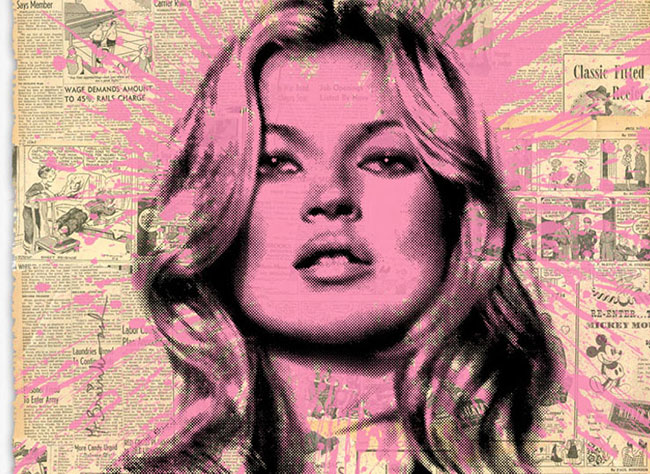 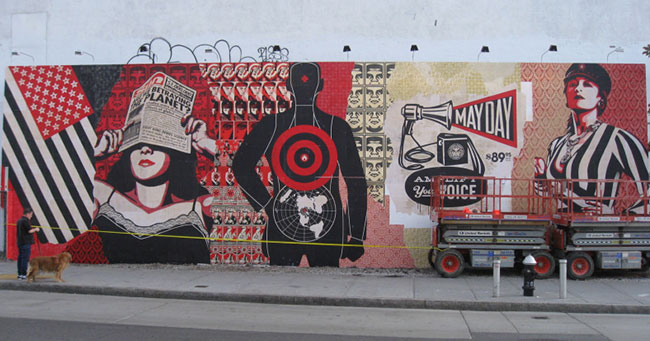 Shepard Fairey’s face must have dropped when he saw these “Yes we scan” posters which are a “remix” of his now iconic “Hope” pieece for Barack Obama’s 2008 presidential campaign. Yesterday he was the one using a photograph without permission, which got him into  a legal battle and a $25,000 fine, but today it looks like someone is doing just the same.

We hear that Shepard Fairey likes the posters a lot and that he will not start any legal proceedings. We agree too, e thing they are great posters with a straight to the point slogan. What do you think?

The posters features the slogan “Yes We Scan,” a parody of Obama’s “Yes We Can” rallying cry, and an image of the president wearing headphones, presumably to listen in on average Americans’ phone calls.

“Subversion of well known symbols and images for social commentary has long been a technique in my repertoire, so I’m glad to see it in the work of others,”  Fairey said 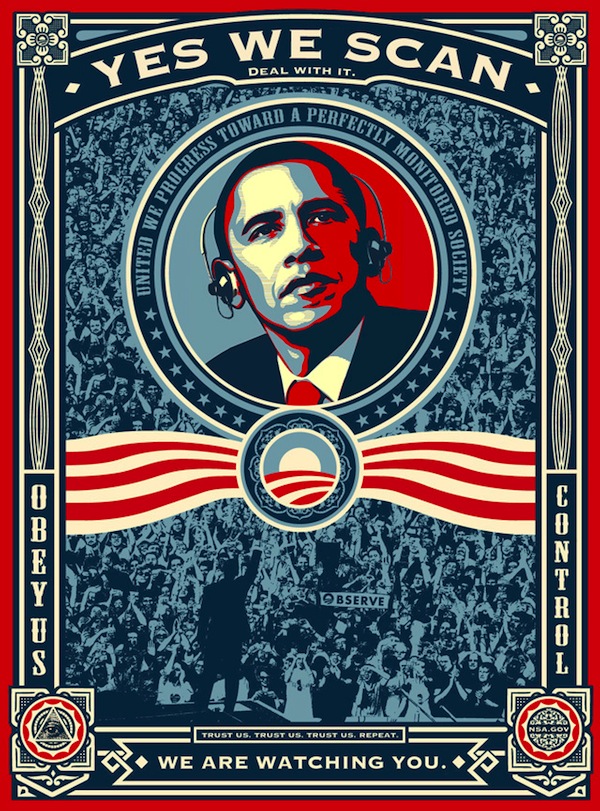 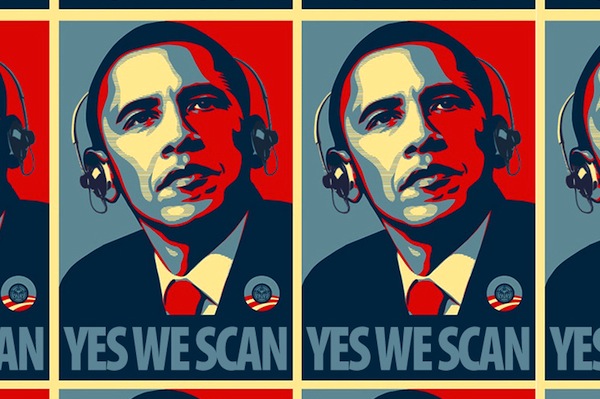 Shepard Fairey’s Sound and Vision show has been the hot topic in town for the last few weeks. The artist and his crew has hit hard for this show since not only the Stolen Space gallery is hosting the show but another much bigger one a few yards away has also been necessary to give a roof to the impressive amount of pieces the artist has produced.

Since the Hope portrait of Obama back in 2008, Shepard Fairey and his brand OBEY has become something people recognize and like. You see a Shepard Fairey and you know it is one – the typography, colors and subject will give it away. OBEY is a brand here to stay. 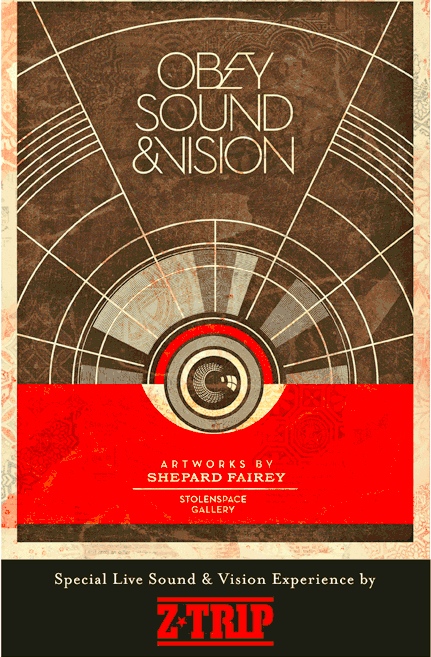 Last time Shepard Fairey had a show in London was five years ago and it was already with Stolen Space. In the meantime, the artist enjoyed a ever growing popularity so crowd are expected to pile up at the preview on the 19th October 2012.

This show is entitled Sound & Vision and will see Shepard Fairey collaborates with Z-Trip to supply the soundtrack to the artwork. We are told that the new works will include mixed media paintings on canvas, works on paper, retired stencils collages, rubylith cuts, and as well as serigraphs on wood, metal and paper.

Producer and DJ, Z-Trip has created a soundtrack that is meant to translate musically Shepard Fairey’s art vision. Z-Trip comments “Shepard does visually what I do musically“. A nice touch from the artist : he  provided records from his own collection as well as customised vintage turntables to enable viewer listening. This section of the show is complemented by a display of seventy-two works, which are inspired by the 12 inch LP sleeve cover.

The artist will therefore use both sound and vision to connect with his audience.

Sound & Vision, the exhibition title is taken from the David Bowie song of the same name so we have included the video clip below.