Designers makers are launching a new weekly market in East London. This will be a platform for 50+ designers and crafts people from London and beyond. Where: Warbuton road | Hackney | London |UK | E8 3RH When: every saturday from 11am till 5pm If you... Read more

Another cracking launch party over at East gallery has just happened, this time for the launch of the 14th issue of the VNA magazine. This issue is featuring artist Sickboy on the cover and is full of extras to enjoy- of 2 Sickboy x Edding marker pens,... Read more

The art auction market has been around for years, certainly a lot more than street art has been but yet, this emerging form of art seems to be on everybody’s lips and wallet indeed. Bonhams’ auction, which just happened, has definitely showed... Read more 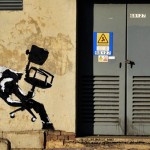 Banksy has finally dropped again in London and this time, he has put a strong emphasis on different signs of pop culture which suits so well street art and especially stencils. Some says that that one of his new work is a clear reference to The Clash... Read more

You must check out PIMPARTWORKS if what you are after is awesome and truly unique urban and street art and much more. Read below a few words from Steve at Pimpartworks and check out some of the art included in their new Limited Edition, Signed and Numbered... Read more 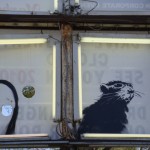 Bristol born artist Banksy has been at it big time in America and have left his mark in various towns and cities across America – Chicago, San Francisco, Detroit, Los Angeles and Toronto. Read more  Read More

ROA is spraying the capital 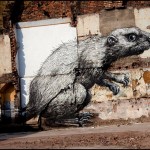 As mentioned in my previous post about the ROA’s first solo exhibition in London, ROA is in London right now and has been dropping new pieces of his so recognizable black and white wildlife. Read more  Read More

This is the movie everybody is talking about right now and whoever is behind the promotion of it is just very clever. We are at the Sundance Film Festival last month in the United States. No mention at all about the movie in the official programme but... Read more

‘Brushes’ iPhone app: painting at the touch of your finger 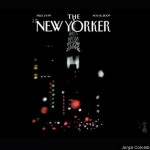 If you read my post about digital painting, you may have got that ART-PIE believes in the ‘get your hands dirty’ approach when it comes to make art. Get your brushes, pencils, spray paint cans, anything and everything and get physical with... Read more