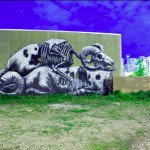 ROA has once again hit the walls, this time is Chicago and as always the pieces are awesome Location: Chicago (The large wall is on the Hedrich Blessing architectural photography studio) Pictures by Brock Brake via unurth  Read More 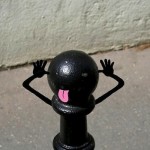 I stumbled across these very creative pictures of what appear to be some street art in Paris. Now, it would seem that the twist is that no one went into the streets and made those up but instead, someone sat in front of a computer and produced them. I... Read more

Blu and Ericailcane collaboration in Bologna 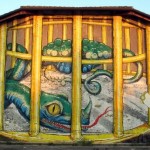 Artists Blu and Ericailcane joined forces in Bologna and have produced a rather mighty mural in Bologna, Italy. Ericailcane got in charge of the animals while Blu put up the cage and other elements. BEFORE AFTER  Read More 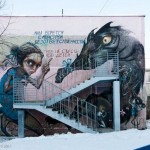 Herakut has been busy recently and produced a very expressive piece on the walls of children’s home № 32 in Ekaterinburg, Russia. Not only the work is remarkable, they also put together a very well shot and edited video to support “the... Read more 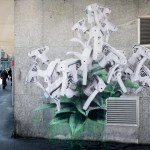 LUDO is a French Street Artist who is enjoying enjoyed a very successful first solo show in Zurich at the Starkat Gallery. LUDO’s style is very particular and his pieces always depict ominous and imaginary plants which always seem to want to grab you... Read more

Artocracy in Tunisia, a project by JR 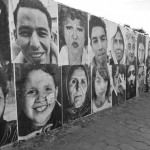 JR’s latest project involved six Tunisian photographers who traveled the country upside down and took 100 pictures of unknown Tunisians. The aim was to get a representative sample of the Tunisian population from all ages and backgrounds. Images... Read more

Mobstr, playing with wall and words 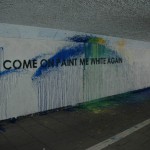 Street artist Mobstr has a very interesting artistic approach and combine stencils with nagging messages which have made Newcastle (where he is from) council going loopy more than once. Mobstr purpose is to make us see the public space we live in. Below... Read more 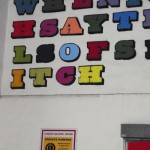 Ben Eine has been back in London and we could not hope better than seeing a new piece enhancing some wall in London. This time you can see his work on the wall of the London Graphic center on Mercer street, London. It reads : Oranges and Lemons say the... Read more 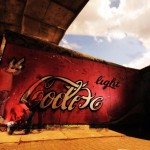 If you are keen on graffiti, you must have seen #codefc stuff on some walls, one of his latest and probably most seen is the Olympic runner with the message “Fuck 2012 – I am ready now ” The man behind #codefc has been active as a graffiti... Read more 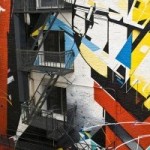