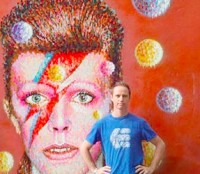 To coincide with (another) David Bowie exhibition, namely “The many faces of David Bowie” opening tonight at Opera gallery, Jimmy C unveiled a large scale portrait in Brixton, where David Bowie is from. You will have recognised the the iconic Aladdin Sane image here. Now on to the show at Opera Gallery. We hear that a bunch of artists including street ones will share their visions of the iconic singer. Some of the artists includes Paul Alexis, Joe Black, C215 and... Read More

Posted by Pierrick Senelaer on October 7, 2011 · Leave a Comment 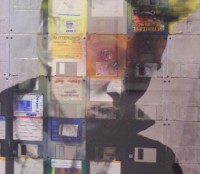 We are big fan of artists using what they can find around them to help them making art or in Nick Gentry’s case, using floppy disks to be his support for his art as well as being integral part of his end product – mainly portraits. Nick Gentry uses wood panels layered with floppy disks which he might paint or not, but one sure thing is that they are fully integrated in his pieces. Using the round bit of the floppy disk as the eyes  is a recurrent occurrence in his... Read More