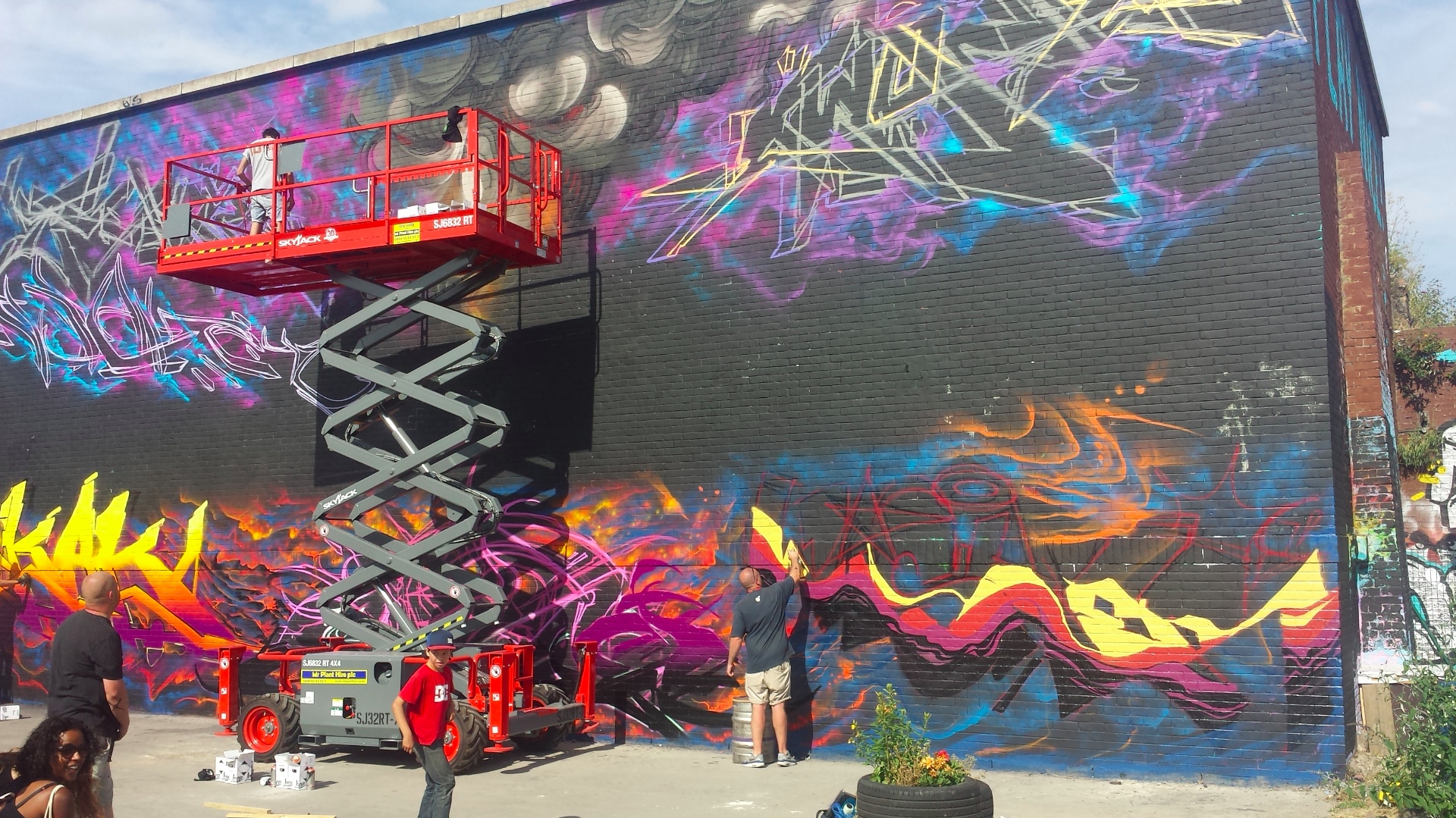 Now in its 6th year, Meeting of Styles UK took place again in London. This event was organised by End Of The Line and offer an awesome 3 days of painting and hip hop.

More pictures after the fold 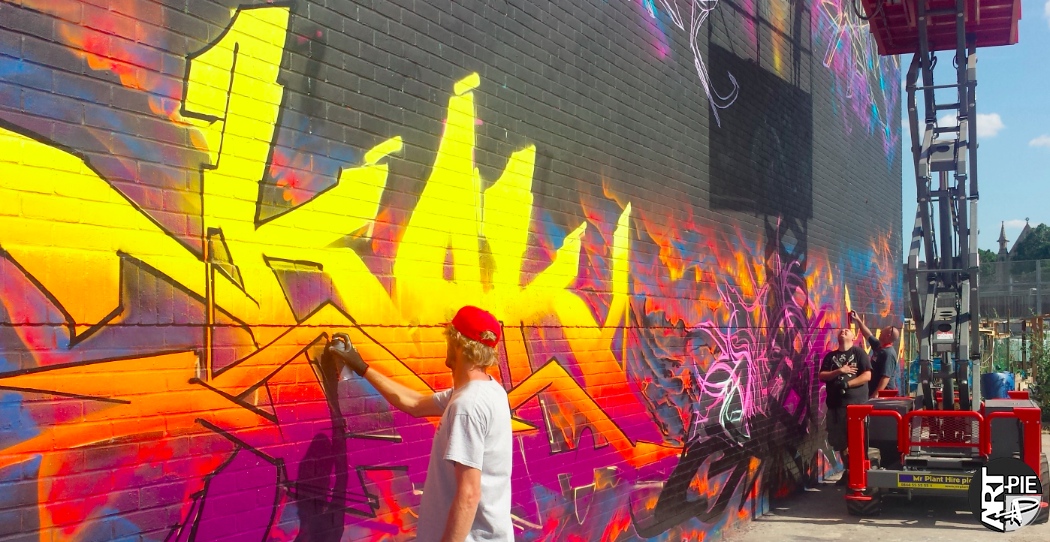 We could only attend one day but truly enjoyed the authenticity of the event and were pleased to see that it was held at Nomadic Community Gardens, in the heart of East london. This area has become I hear a must-go to see Street Art in London. Other pop up spots included Allen Gardens, Pedley Street, Grimsby Street & Scalter Street. 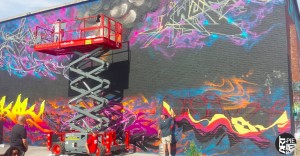 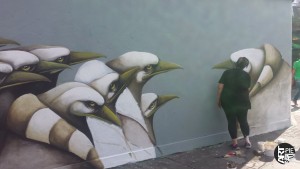 EN MASSE is a Montreal based, multi-artist collaborative drawing project. It draws life from the many creative individuals who take part in the project to create large-scale, highly spontaneous drawings in black and white. 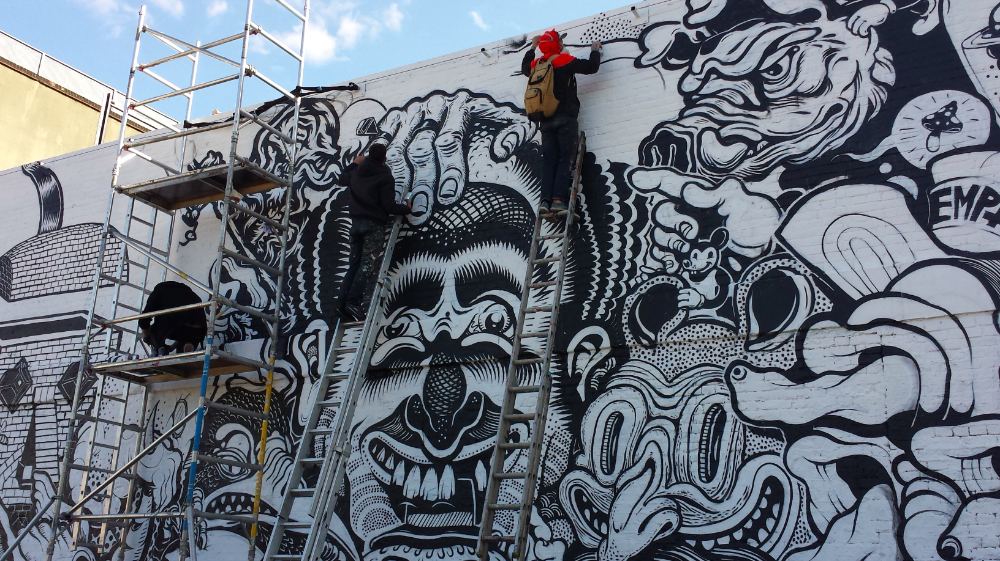 EN MASSE explores the creation of a collective vision; works created together that are greater than any one person could create alone.

The project was created by Tim Barnard and Jason Botkin in 2009, at the Galerie Pangée. Now under the direction of Botkin and Rupert Bottenberg, the initiative has worked with nearly 250+ artists internationally.

The EN MASSE Project nurtures the broadening and solidification of artistic communities everywhere it goes, serving artists from extremely diverse backgrounds such as graphic novels, graffiti, tattoo, illustration, design and the fine arts. 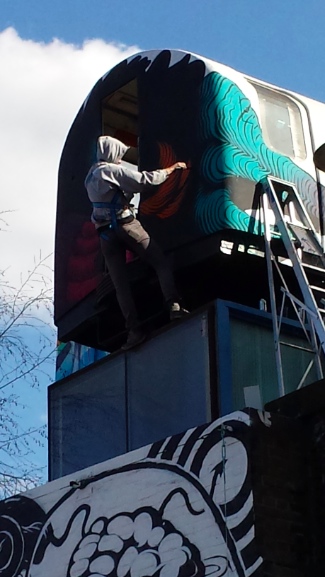 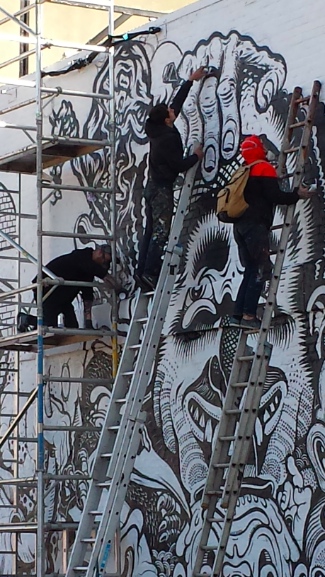 For the most part, artists participating in the project are self-taught creative entrepreneurs. EN MASSE is a high-profile public platform for these people who have often found themselves in an awkward relationship with many contemporary arts institutions (resulting in their work often being excluded from mainstream galleries, museums, and funding agencies). This is a bridge for artist to institution, and vice versa. 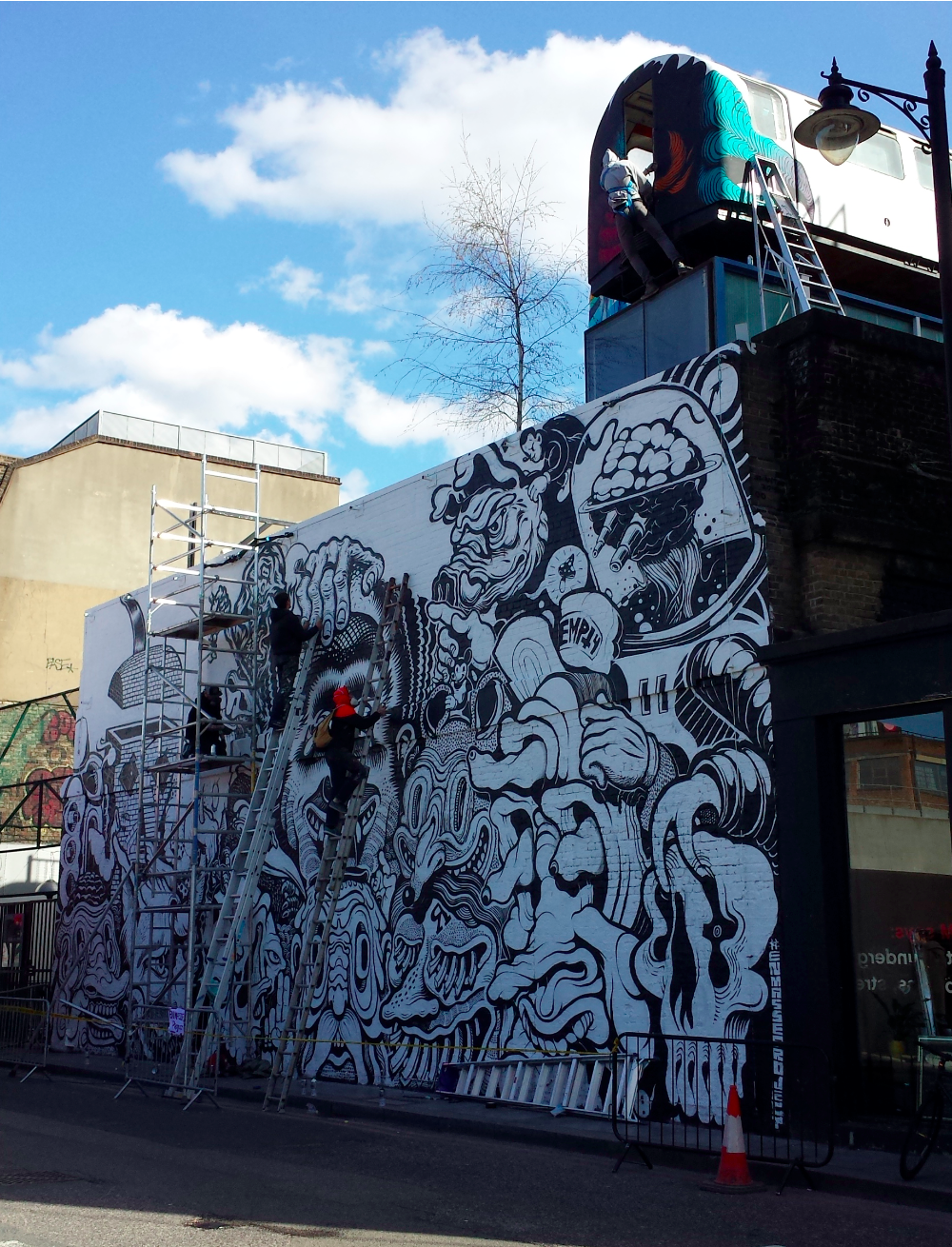 This exhibition aims to show Chila Kumari Burman’s work from 2000 to the present. For more than twenty five years Chila has been creating powerful images of contemporary Asian Feminisms.

Born in Liverpool to a Hindu Punjabi family Chila’s art explores issues of class, gender, ethnicity, identity – but through the prism of defiance and love. Her work is informed by popular culture, Bollywood, fashion, found objects and a long-sustained examination of self-portraiture. 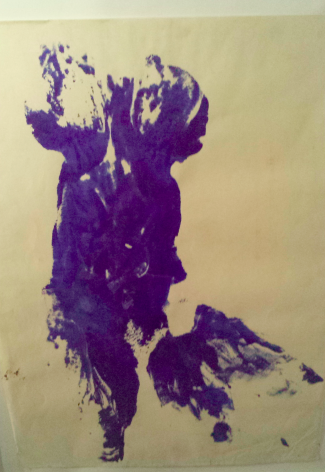 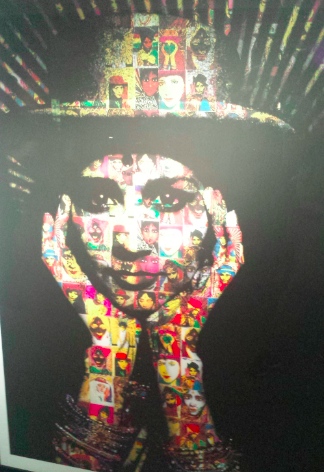 The exhibition will showcase a dazzling array of media:  printmaking, collage, mixed media, photography, sculpture and painting. Through all of these media Chila’s aim remains steady: the provocative undermining of fixed categories. 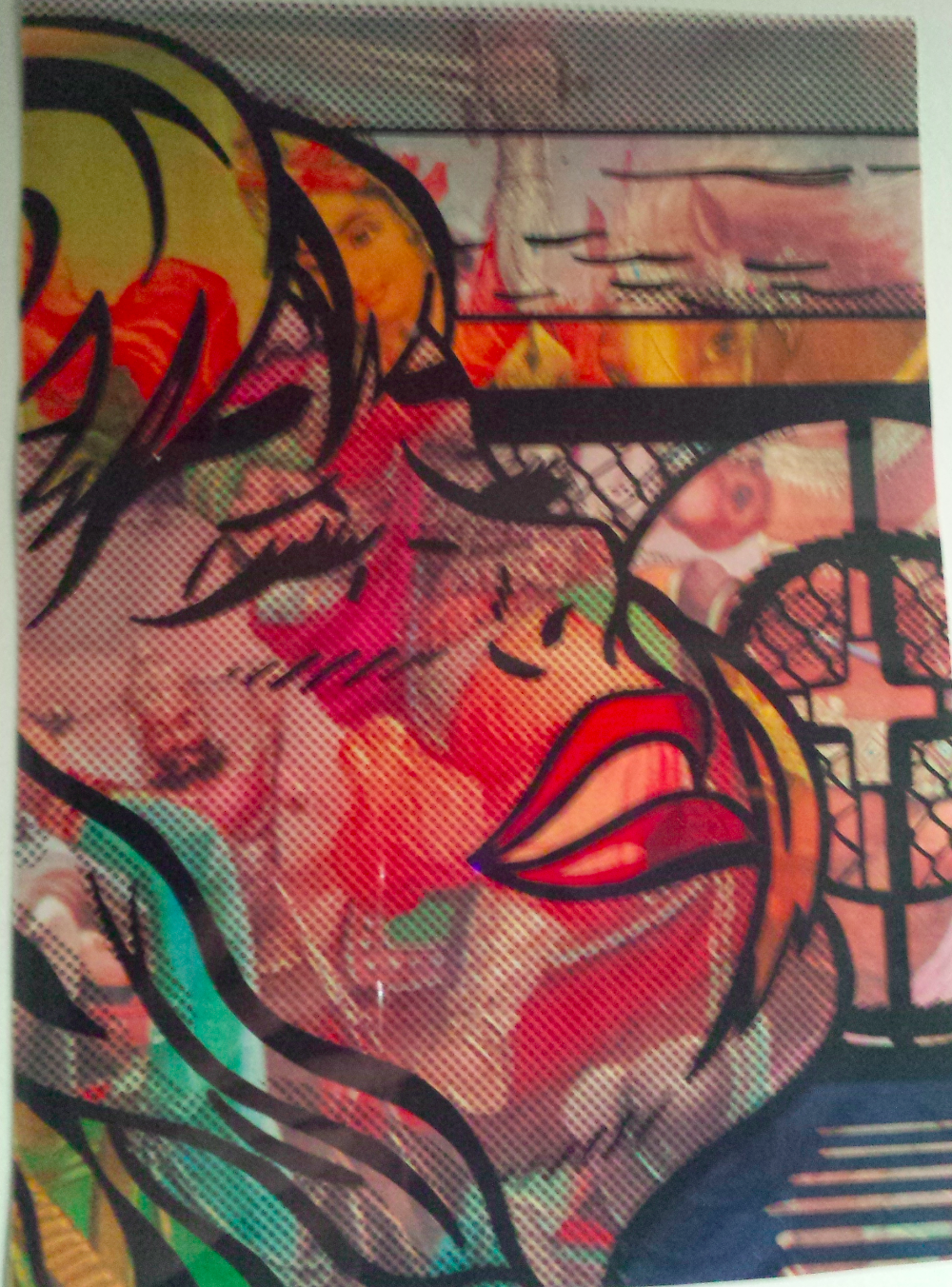 Another month, another edition of The Creative Bubble and a myriad of emerging artists showcasing their work – visual artists, spoken word and Poetry, Music & the latest addition and now regular appearance of the guys from Let The Film Do The Talking who invite you to immerse yourself in short films and augmented reality.

As always, we are providing a selection of artists we feel should get some exposure just because we appreciate their work and hope you will to.

We are delighted to have James Kinsella involved in this pop up show. James currently resides in Austria, yes The Creative Bubble is international (!), who will be showing three of his screen print on acrylic paint latest work. We included below ‘Herschelgasse’ for you to see what you can expect to see on display if you come down. 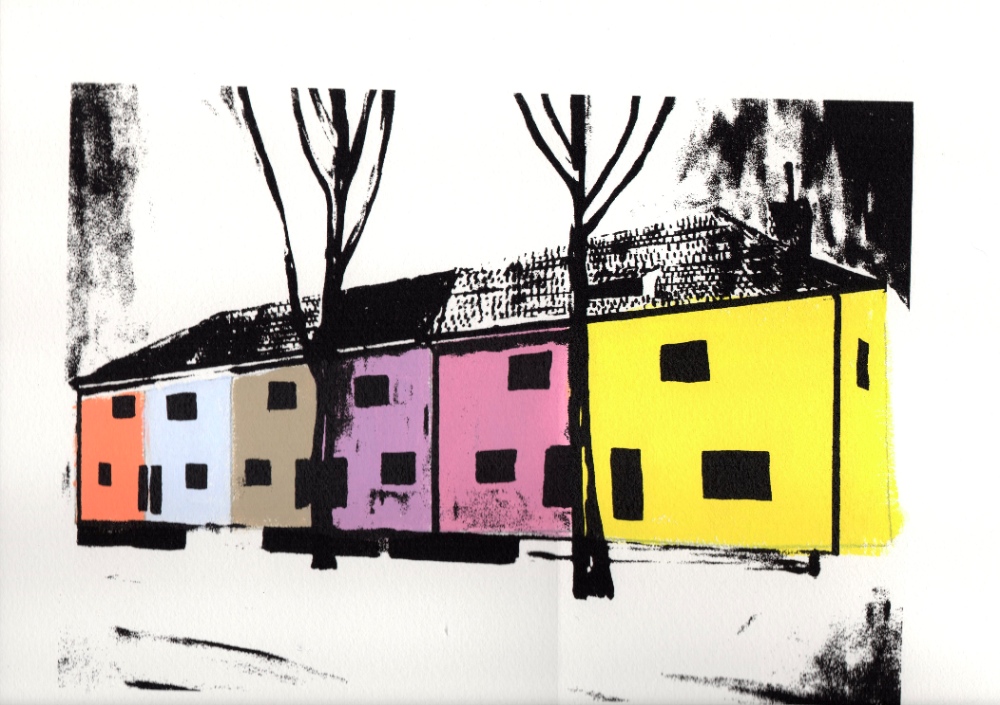 ‘Less is more’ is what we felt when we first saw James’ work. We like the “sketchy’ feel of this piece and above all the contrast between black outlines and bright and bold colours.

We cannot wait to hang it up on the walls of the Roxy Bar and Screen.

Back in 2008, a group of teenagers were sent to jail in the UK in lieu of defacing public property. Yet while they were being imprisoned here, their work was being hailed in the New York gallery. There is only one word that can be used to describe how the UK as a society views graffiti street art – confusion.The confusion now runs deeper than the hide and seek between those who have a can and spray, and those that remove that paint off the wall.

With news such as the imprisonment of the Graffiti artists, the common perception starts to develop that the state is against such street art and perceives it to be a crime. Yet, just a few blocks away from the Southwark Crown court that passed the judgment on the graffiti artists is a Major museum that displays large murals of six distinguished street artists.

It is interesting to note that most street artists consider London in the 21st century to be for street art what Paris was in the 20th Century to Impressionism. The journey of street art in London has been and continues to be turbulent. A large number of people show displeasure at the artists, and think of them as villains disfiguring the beauty of their city. However, a growing majority loves London’s very own modern street art.

London’s street art isn’t conventional or identical to street arts around the globe. Street art in London has its own style. The artists use elegance and punk to their advantage to create murals and artworks that can seem like high quality museum quality art products. With the passage of time though, the works of street artists have started to be given importance in different circles. Some of the work has even been placed in top quality museums.

Banksy is the man widely accredited for taking street art into museums. He started by sneaking his works into smaller museums. Ultimately, there came a time when his books were being sold in high quality stores and his works auctioned for hundreds of thousands of pounds. His works and antics were followed by a large group of imitators. He can be accredited with having influenced the current crop of up and coming street artists. His work showed them the potential success that can be achieved by a street artist despite the odds.

Let see the street art and its definition as crime in the world over. There are countries in the world where there is clear consensus against street art and then there are countries that are relaxed about it and think of such art as a sign of the liberty of their people. In Brazil for instance, the people are more relaxed about street art, with large works of street art dedicated to famous footballers unveiled during the recently concluded Football World Cup (Read our story about street art and the 2014 Brazilian World cup). In Australia, there is a large majority of people who look down upon street art and consider art works on walls as an infringement of their rights. However, there are many people there who appreciate street art.

Street art in the UK and the world over is a highly polarizing phenomenon. There are views like the ones that regard street art as painting on the streets and not attempts at hurting or injuring anyone. They think of street art as something to be appreciated and cherished rather than white washed and destroyed. And yet there are those people who view street art as an industrial level attempt to de-beautify and infringe on the individual’s property and his rights.

While Street art continues to divide opinions on its criminality or legality, it has turned out to be a marketing campaign for leading brands like Red Bull, Puma, and Adidas etc. All these brands have tried to cash in on the increasing popularity of graffiti and street art in the UK.

Street art has always divided opinions and it is highly unlikely any consensus will be reached soon. One thing, however, is sure – street art is starting to revolutionize the art industry in the world.

Whether the revolution is positive or negative is a matter of opinion.