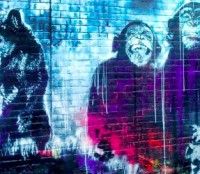 The All City Canvas project in Mexico 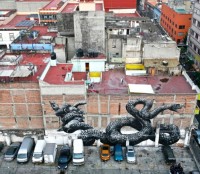 Take nine artists, from around the world as well as locals and release them in the Distrito Federal’s prime real estate which becomes their canvas – that is the “All City Canvas” project. The artists, Interesni Kazki (Ukraine), El Mac (USA), Saner (Mexico), Sego (Mexico), Roa (Belgium), Herakut (Germany), Vhils (Portugal) and Ecif (Spain) have gone big, very big for some like Escif. Included below are some of the mighty pieces of street art that can be seen... Read More 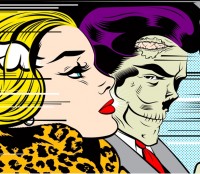 Posted by Pierrick Senelaer on September 9, 2011 · Leave a Comment

Filed under I WAS THERE · Tagged with blackall studios, Herakut

Posted by Pierrick Senelaer on May 3, 2011 · Leave a Comment 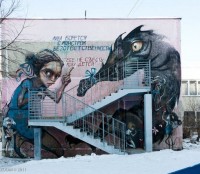 Herakut has been busy recently and produced a very expressive piece on the walls of children’s home № 32 in Ekaterinburg, Russia. Not only the work is remarkable, they also put together a very well shot and edited video to support “the struggle with the monster of irresponsibility”, name of this another awesome association between these two artists. If you have not got Herarkut book, get it from Amazon now. It is full of wonders. HERAKUT – the perfect... Read More